Televangelist Jim Bakker isn’t just a guy who tries to sell you Giant Buckets of Food for the Apocalypse. He was the quintessential shady-as-hell 1980s televangelist best known for the allegation of rape against him as well as the subsequent hush money payout, and selling lifetime memberships to his ministry with promises of a luxury hotel stay which he never delivered. He was convicted on charges of mail fraud, wire fraud, and conspiracy, and spent several years in prison.

He doesn’t want you to know all that, though.

In fact, he told his audience on today’s show that there was a very different reason he went to jail.

In 1988, fellow televangelist Pat Robertson was running for president. After a decent showing in the Iowa caucuses, his popularity faded in favor of George H. W. Bush and he dropped out. But according to Bakker, he was put in jail because Robertson’s political opponents could find very little dirt on him (except for when he “had love” while he was single) and they worried Bakker would endorse him and propel him to the top of the GOP ticket.

Jim Bakker claims that the government put him in prison because they were afraid that he was going to endorse Pat Robertson and make him president. pic.twitter.com/lXgNThXLH2

… I’ve never told this before. But the reason many of them wanted to put me in prison — They were so afraid that I would endorse Pat Robertson, and they knew that we had stood with Ronald Reagan and others and helped elect people. And they wanted me out of the picture!

Right. That’s it. “They” were so afraid of Jim Bakker, that they managed to put him in prison before he could make an endorsement. As if all the fraud and conspiracy and other allegations were imaginary. (I assure you that no obituary of Robertson’s campaign includes a lack of an endorsement from Bakker as the sole reason he lost.)

Bakker’s revisionist history might work on an audience gullible enough to buy Bakker’s products, but they have no bearing in reality. 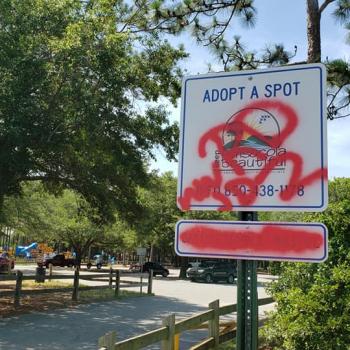