A FL Park “Adopted” by Satanists Has Been Vandalized in the Name of Christianity July 8, 2019 Hemant Mehta

A few days ago, I posted that The Satanic Temple chapter in West Florida “adopted” Hitzman-Optimist Park in Pensacola, vowing to keep it clean. Groups that participate in the program, Keep Pensacola Beautiful, get some publicity via a sign in the park.

Well, the park and the sign have already been vandalized by Christians — or at least in the name of Christianity.

In addition to the sign, there’s red spray paint on the ground that says “JESUS” and more on a nearby railing that says “Jesus God will crush your hidden temple” and “County owes answers.”

Adding insult to this injury, Pensacola Mayor Grover Robinson said the Satanists shouldn’t have been able to adopt this park at all because it’s “not on the list of Keep Pensacola Beautiful eligible parks.” That’s supposedly because it’s too large for the program, and it’s therefore the city’s responsibility to keep it clean, not any individual group’s. The Satanic Temple, he said, can “select a different, smaller park.”

Two things about that: First, it’s not the Satanist’s fault. The folks who run KPB had no problem letting them adopt the park and even created the sign for them. Second, keep in mind that the Satanists requested nearby Bayview Park (home of a controversial Giant Christian Cross) but were told that park was also off-limits to groups because a local community center was responsible for its upkeep.

None of that should take away from the vandalism, though.

We don’t know who did it or what they hoped to accomplish, but you can imagine what the reaction would be if atheists or Satanists did something similar to a park adopted by Christians. This is no less of a threat to the group in question.

Jes Smith, the head of this Satanic chapter, told me the vandalism likely happened last night or this morning. The group would’ve cleaned it up by now, but given the mayor’s comments, he’s waiting to hear back from Keep Pensacola Beautiful as to how they want to move forward with the adoption situation. (This is all assuming the mayor’s explanation is accurate about the adoption of this park being a clerical mistake and not some personal vendetta against Satanists.) If the city says it’s their responsibility to clean the park, they’ll have to deal with the spray paint.

As for the graffiti, Smith added that it’s unfortunate someone would do this in an effort to discourage them from cleaning the park. He added that observers should challenge themselves to question “what it means when Satanists want to clean the park, and someone motivated by Jesus wants to vandalize the park.”

He was also disappointed that the vandalism went beyond just the Satanist sign and affected the park that everyone in the community shares. 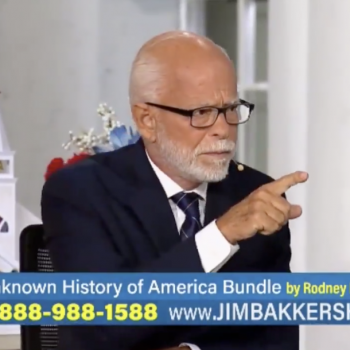 July 8, 2019
Jim Bakker: I Went to Prison Because Critics Worried I'd Endorse Pat Robertson
Next Post

July 8, 2019 Appeals Court: Brevard County (FL) Officials Can’t Discriminate Against Atheists
Browse Our Archives
What Are Your Thoughts?leave a comment