Last week, Arizona Secretary of State Katie Hobbs displayed the Pride flag and the transgender flag outside the Capitol Museum. You can see the rainbow flag in the image below, with the smaller blue, pink, and white striped trans flag just above it. 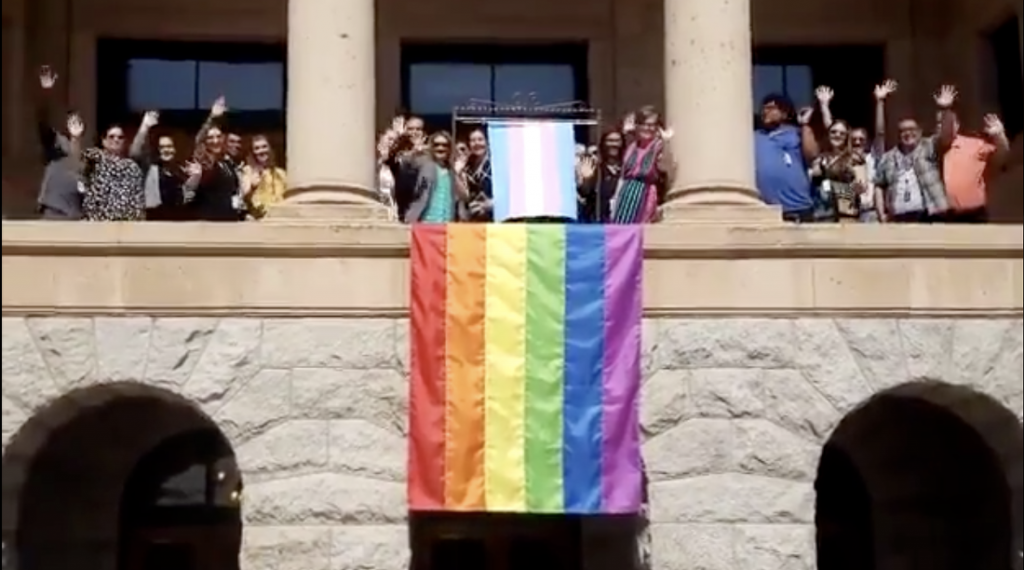 They were quickly taken down — which is a controversy in itself — but that’s not even the issue right now.

According to Diane Douglas, the former Superintendent of Public Instruction (i.e. the top official overseeing public schools in the state), that wasn’t a trans flag on display. That was the Pedophilia flag!

Or, as she put it, the “pedephilia” flag. Which makes no sense because they don’t have a flag. 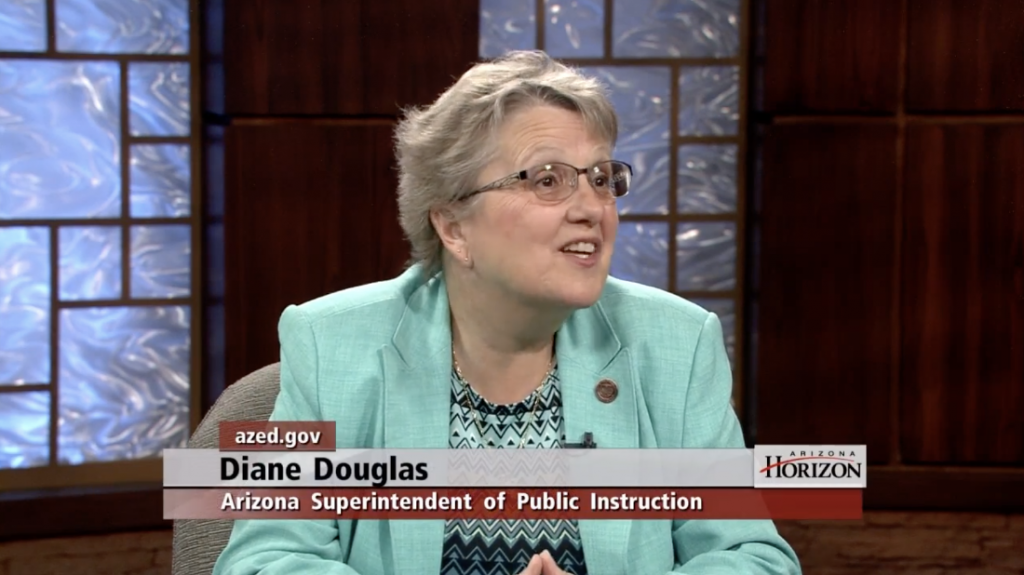 Her Facebook post condemning Democrats and LGBTQ people is still up as of this writing, but maybe the most fascinating thing about it is the edit history. She made several changes to the post — without correcting her most baseless claims — and even when she finally made the big correction about the flag, she doubled-down on how wrong Hobbs was.

This is a trip. Let’s walk through it together.

Edit 1 (July 3, 11:12 a.m.): She condemns Hobbs and current Superintendent of Public Instruction Kathy Hoffman (the woman who defeated her), accusing them of promoting pedophilia and, eventually, incest.

Edit 2 (one minute later): She forgot something! She adds in one final line, “Leave our children OUT of your sex life and sexual agendas.” There. Much better.

Edit 3 (one minute prior… somehow): She adds a parenthetical, perhaps aware that the flag in question may not be promoting pedophilia. But instead of correcting it, she insists Hobbs had the pedophilia flag up and it looks really similar to the one pictured in the article. Meanwhile, she misspells “pedophilia” (in two different ways!) as well as “capitol.”

Edit 5 (an hour later): Okay, okay. She finally admits she made a mistake and addresses it in a new paragraph. She says the flag at the capitol was indeed a transgender flag… but still demands LGBT people “stay AWAY from our children.” Also, the earlier insinuations that LGBT people want to recruit children for pedophilia and incest are still there. 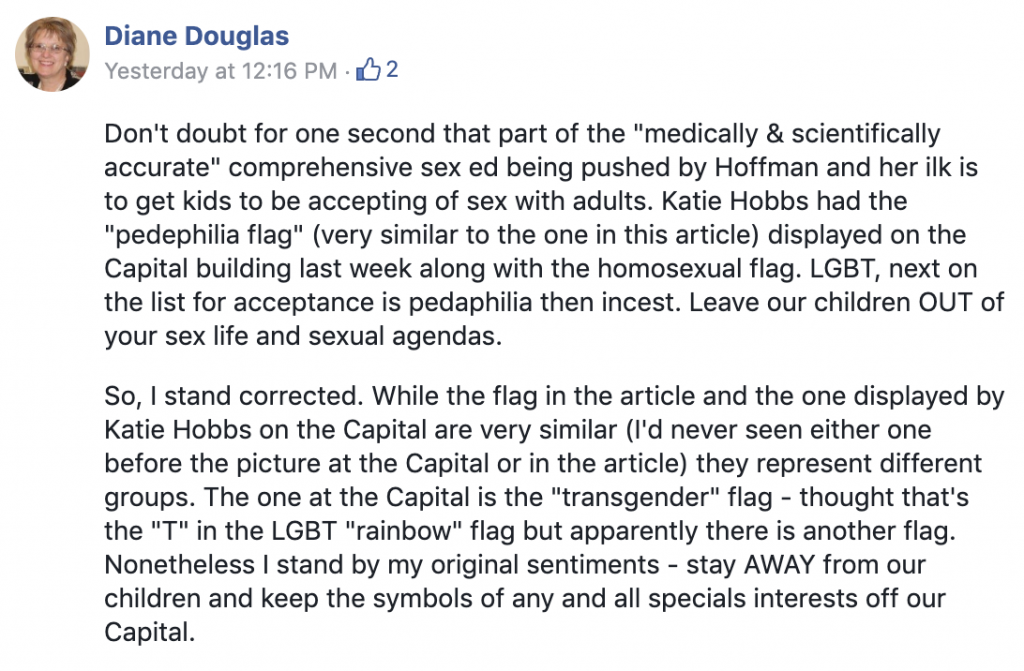 Edit 6 (several hours later): She finally caught the spelling error! She changed the first “Capital” to “Capitol.” Clearly, the biggest mistake has been fixed. 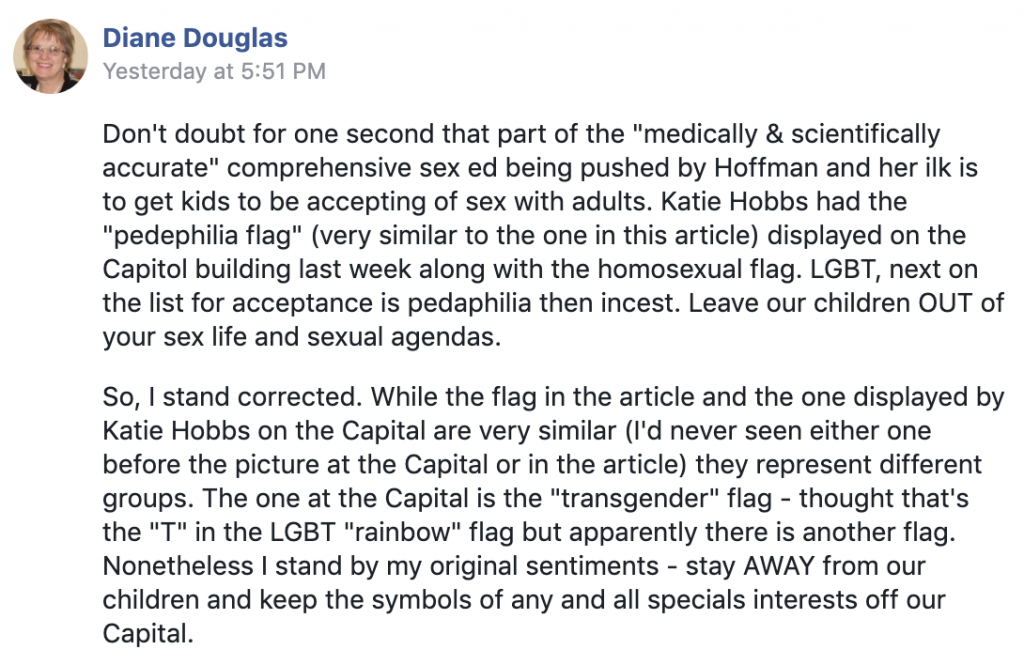 Edit 7 (a minute later): She finally caught the other spelling error! She changed the last “Capital” to “Capitol.” Clearly, her post is now perfect. 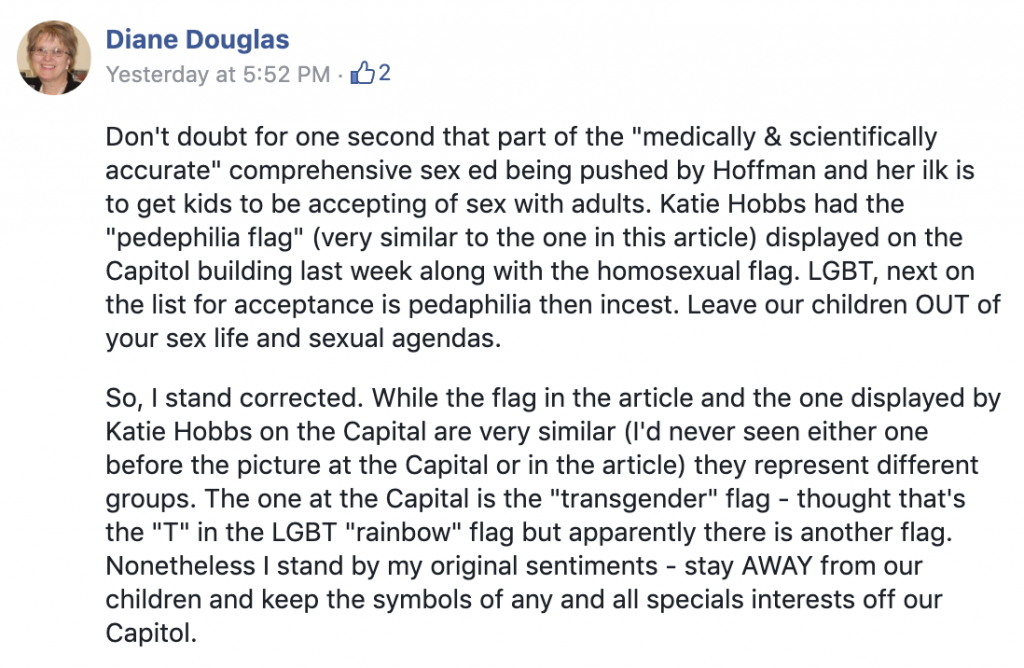 By the way, last year, Douglas appointed a Young Earth Creationist to a committee tasked with revising the state’s science standards for teaching evolution.

This Republican used to be in charge of public education in Arizona.

(via Joe. My. God. Screenshot of Douglas via YouTube) 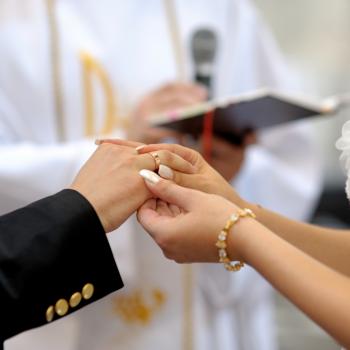 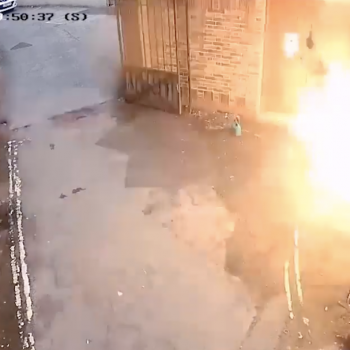 July 6, 2019 A White Supremacist Set Himself on Fire While Trying to Burn Down a Synagogue
Browse Our Archives
What Are Your Thoughts?leave a comment