As I mentioned last week, a long-time church/state separation battle in Texas swerved in a weird direction when the “JESUS welcomes you to Hawkins” sign finally came down.

For years, the Freedom From Religion Foundation and the mayor of Hawkins were duking it out in the courts over the legality of that sign. At some point, a judge ordered it to come down… but it never did. Eventually, a man began a church and claimed the sign could stay because it was on his property… even though it wasn’t. And then there was a legal battle about that. You can read the details here.

But then, out of nowhere last week, the sign was taken down by city officials because they said a new street was being built on that land. The sign came down and religion had nothing to do with it.

Anti-climactic? Maybe. But the church’s owner still claims this is a case of religious discrimination, so we’ll see how that plays out.

In the meantime, I just found out there’s video of the teardown.

The city workers look like they’re having a good time. Music aside, the sign comes down with a whimper.

There you have it. Jesus has officially been defeated in Hawkins. Christ is un-risen. Or something like that.
Previous Post 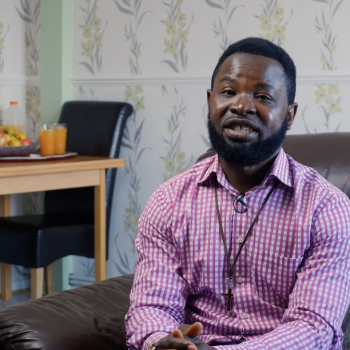 July 5, 2019
Christian Bigot Kicked Out of School Gets Legal Victory, But It's Not Over Yet
Next Post