How do you make a whole bunch of Texans angry? Say the word “No,” apparently.

The Metroplex Atheists in Fort Worth have put up banners downtown with the phrase “In No God We Trust.”

It’s part of an upcoming campaign calling for a change of the national motto from “In God We Trust” to the more secular “E Pluribus Unum” (out of many, one). The latter, of course, was the nation’s unofficial motto… until Christians pushed for their version in the 1950s. 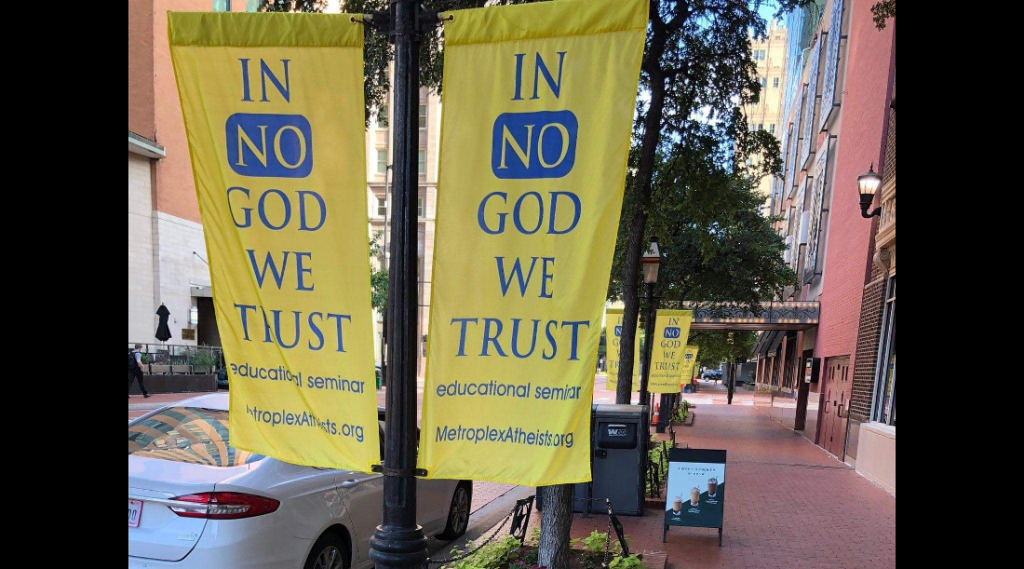 Whether the campaign will be successful — it won’t be — isn’t the issue. The banners themselves are creating all kinds of controversy because locals can’t seem to handle staring at a sign that even hints at atheism. (Now they understand how atheists feel every time we hear their slogan…)

Even Mayor Betsy Price voiced her displeasure with the signs, acting like she would ban them if she had the power, but that damn Constitution got in her way.

…We must respect freedom of speech. As we approach the Fourth of July, we must remember that many Americans have fought and died for the freedoms we cherish today." – Mayor Betsy (2/2)

Attached for reference is the City's official statement. pic.twitter.com/Ce2t0JCF7s

Oh spare me. Anyone who is “appalled” by the site of a non-Christian group saying the sort of thing Christians say all the time needs to get out more. She comes off like she’s merely tolerating the atheists. A better mayor would be more vocally supportive of what the atheists are doing; that doesn’t mean agreeing with their beliefs. (Can you imagine the right-wing overreaction that would ensue if Mayor Pete Buttigieg said he was “appalled” by a sign saying “In God We Trust”?)

Price isn’t the only person whining about the message. Local country music artist Matt Kimbrow said on Facebook that he couldn’t believe the city was allowing the signs. He added that they “offend me and should to everyone that has strong faith.” Because other people voicing their opinions is very offensive to his belief in Christian Supremacy.

Guess what? Churches bother me. It doesn’t mean I’m going to cry to my mayor about it. Maybe Kimbrow should read those lines that appears before the Second Amendment.

At least the city isn’t getting in the way. A member of the group’s board of directors, Randy Word, told me the signs followed the city’s rules, cost $4,200 for 66 banners (including rental fees for the July 14 event), and that they’ll be up for two weeks. He also told me the mayor’s comments were “expected,” pointing out how her words strike a very different tone from the city’s attorney who presumably wrote the city’s statement on the matter. That statement takes a much more clinical, legalistic approach. But at least it doesn’t include the word “appalling.”

At least the signs are working. They’re starting a conversation. They’re getting people upset over nothing. And the negative reaction from the public is a perfect way to begin a dialogue about why “In God We Trust” should never be our national motto. A divisive slogan doesn’t make us more united.

Incidentally, I’ve been told at least one banner has been vandalized. You can also read more about the situation from Martin Hughes and Aron Ra.