An awful invocation is coming back to haunt a preacher in more ways than one.

Back in March, Georgia State Rep. Trey Kelley invited his father Doyle Kelley to deliver the legislature’s opening prayer. Doyle Kelley used the opportunity to remind the lawmakers that 7 million citizens were “lost” and “on their way to Hell.”

How’s that for inspiring…?

That invocation was awful. But it also revealed something about the elder Kelley: Given the opportunity, he’s probably going to preach.

Well, as it turns out, he’s also the head football coach at Cedartown High School. So does he preach to those students, too? The Freedom From Religion Foundation wanted to find out, so they filed an open records request only to find that the team employs a chaplain, Rev. Wayne Benefield, “who prays with the team.”

FFRF then sent a letter to the school district urging them to sack the chaplain and reprimand Doyle before any litigation has to be filed.

“We ask that the district take immediate action to end any official chaplaincy program at Cedartown High School and ensure that school-sponsored events do not include scheduled prayer,” FFRF Legal Fellow Chris Line wrote to district Superintendent Laurie Atkins. “We further request that all coaches be reminded that they may not promote religion while acting in their official capacity, nor enlist an outside adult to do the same.”

Guess what? It worked.

According to Superintendent Laurie Atkins, she has informed the men that the chaplaincy program must “cease immediately.” She added that she’s met with Doyle and Benefield to remind them of the law and that a meeting will be held with all athletic coaches and extra-curricular sponsors to reiterate the same message.

FFRF applauds the district for thoroughly addressing this violation.

“FFRF is very pleased with the district’s prompt response to this issue,” comments FFRF Co-President Annie Laurie Gaylor. “We commend the district on its commitment to upholding the rights of conscience of its students and community members.”

How’s that for karma? Doyle said non-Christians were going to Hell, and it cost him a chaplain and his opportunity to proselytize to kids. 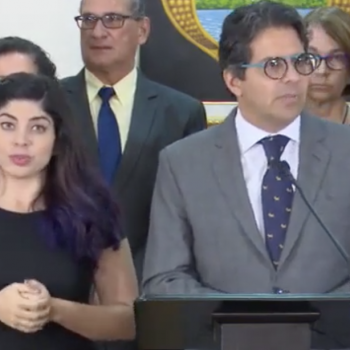