At Long Last, the “JESUS Welcomes You to Hawkins” Sign in Texas Has Come Down June 29, 2019 Hemant Mehta

At Long Last, the “JESUS Welcomes You to Hawkins” Sign in Texas Has Come Down

For several months in 2015, one of the bigger church/state controversies involved a huge sign in a Texas town. (I know. It all seems so quaint now.)

The sign was 18 feet long and read “JESUS welcomes you to Hawkins.” With Jesus in ALL CAPS like it was an online comment thread. It had been put up by Mayor Will Rogers and the Freedom From Religion Foundation argued that it was government endorsement of religion. 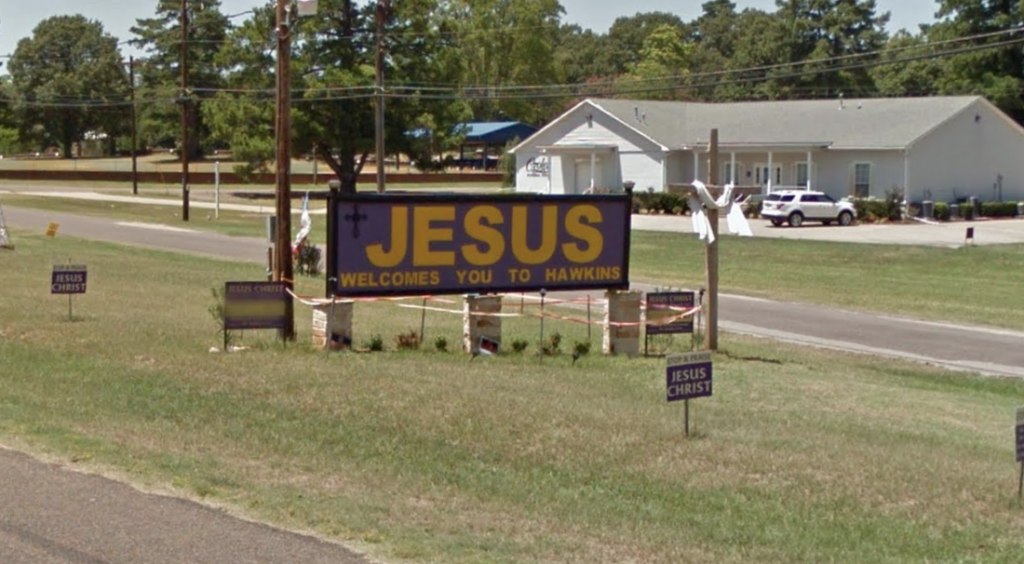 Rogers maintained it was somehow not a promotion of Christianity. At one point, he even compared Jesus to Superman, not recognizing the irony of comparing his Savior to another fictional character. (You can read a lengthy history of the sign here.)

The city council eventually voted to remove the sign… but then a local man created a church on that piece of property just so he could keep the sign in place… but it was unclear whether the sign was on public or private property… until 2017 when a court finally ruled in the city’s favor (and an appeals court affirmed the decision).

Even though the city won, the sign’s remained in place this whole time.

The city just up and removed it — implying that this was public property.

A municipal street will be constructed at the site, Hawkins City Secretary Dona Jordan said.

“We are fixing to put a street in on our easement,” Jordan said. “That is our platted street.”

“The city employees destroyed our church property, pulled up our crosses and destroyed everything,” [trustee Mark] McDonald said. He was notified by police.

“We’re treating it like a hate crime of religious discrimination that was conspired by the city. We have enough documents to prove that,” McDonald said. “The city was warned (Thursday) by our attorneys not to touch it and not to bother it. There’s been closed meetings, closed records (and) a lot of things wrong.”

For the city’s part, there’s no emotional attachment to the sign. The fact that it said “JESUS” on it was irrelevant.

“It was a Jesus sign, but it would have been any sign,” [Police Chief Manfred Gilow] said. “It has nothing to do with it. As chief of police here, we’re just here to keep the peace, and we just respond. We did not know when they took it down.”

The sign finally came down and an atheist group had nothing to do with it. See? Some cities can do the right thing. Even if it takes several years.

(Screenshot via Google Maps. Thanks to Kevin for the link)