Pat Robertson: You Must Protest Drag Queen Story Hours By Voting Out Librarians

On today’s episode of The 700 Club, a viewer asked Pat Robertson — that was his first mistake — how to handle Drag Queen Story Hour events at local libraries in Florida.

Robertson’s response was about as ignorant as you’d expect.

Look, it’s an outrage. I think it’s time Christians… You don’t want to hate people, you want to love people. You want to always be loving and forgiving and all that stuff — but at the same time, the citizens of a city need to vote stuff like that out. Whoever is permitting that — the head librarian, the superintendent of education — whoever is permitting it needs to be voted out of office.

And if the citizens won’t do it, then they’re gonna take what’s given to them. That’s just the way it is. So you need to exercise your authority, and if you don’t exercise it, you lose it, all right?

There’s nothing outrageous about people reading books to children, even if they’re dressed in drag.

Robertson, who has no idea how libraries work, thinks someone at the top is making a decision to hold these events. That’s not how it works. Libraries are public spaces that community members can reserve for their events, assuming they follow the rules. Church groups can do it, too. In fact, it would be illegal for the library to say no in these situations. (In some cases, librarians can and do book events like this, but the reservation rules still apply.)

Robertson also wants people to vote out the head librarians… which means he thinks librarians are elected. (They are not.) Even if the board of trustees at a library is politically appointed, the roles are apolitical. Trying to fire library executives for permitting certain events would lead to chaos.

If Christians want to “protest,” they are welcome to stage their own reading events at libraries. I’m sure kids can’t wait to sign up and listen to pastors tell them all about why they’re going to Hell for disobeying their parents. Fun!

If anything, the viewer is doing everything he can to promote the drag queen events. After all, when you don’t read books, you become the sort of person who grows up to ask Pat Robertson for advice. 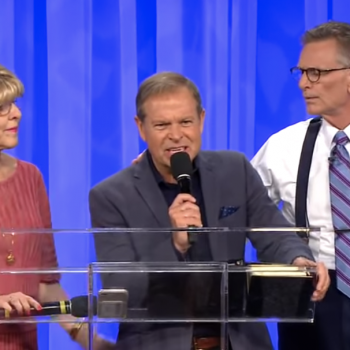 June 25, 2019
These Pastors Are Way Too Excited About a Televangelist Preaching in New England
Next Post