Sunday afternoon’s Pride Parade in Toronto rolled out according to plan, with extra security measures put in place by the city ensuring a safe place for participants to celebrate.

Nevertheless, far-right violence reared its head in the city over the course of the weekend.

As Toronto’s Pride celebrations were in full swing Saturday, another downtown gathering — considerably smaller — protested and picketed for the “values” of the far right. Participant Wayne Peters described their demonstration as “a celebration for those of European culture.” The groups represented by the far-right contingent have been reported to include a Canadian chapter of PEGIDA (Patriotic Europeans Against the Islamisation of the West), Wolves of Odin, the Canadian Nationalist Party, and the Northern Guard. They hoisted signs with religious imagery, slogans like “Islam is Jihad” and “Trudeau Must Go,” and quotations from the Book of Revelations and the Qur’an — the latter used to imply that non-Muslim Canadians are at risk of violence from their Muslim neighbors.

Those protestors would have been better off looking in the mirror.

Another angle of the mall fight yesterday in Toronto after Pegida.

Vanderweide sucker punching someone, and the same person on the ground being kicked and hit by Radovicka, while Boswick screams “fuck him up” and “show us your face!” pic.twitter.com/F68cfSe7Z0

Participants in the rally videotaped themselves walking away from the site of the protest, followed by anti-fascist protestors. A man later identified by activists as Ron Banerjee used a megaphone to goad protestors with veiled threats towards the LGBTQ community:

Church Street is the heart of Toronto’s Gay Village and, at the time of the altercation, was hosting the Toronto Pride Parade Street Fair.

The far-right group, led by Banerjee and his compatriot Rick Boswick, proceeded to the Eaton Centre. Recorded while walking, Banerjee suggested, “Let’s have a big fight right inside the Eaton Centre!” Boswick expressed agreement, and they led the group into the mall.

Shortly thereafter, violence broke out, with several members of the right-wing group punching and kicking an anti-fascist counter-protestor while mall security attempts to intervene. Further footage, purportedly recorded and released by Boswick, showed the far-right participants shouting “Show his face!” and “Citizen’s arrest!” as they continued to attack, while nearby stores shuttered their security gates to protect customers and staff.

Footage of the altercation clearly showed that one of the principal actors was wearing a black T-shirt with white text proclaiming, in large letters across the front, “Jesus Christ is King”; text on the back exhorted others to “read the Bible, repent, and be born again.” The shirt’s wearer was identified as Ylli Radovicka, who also apparently goes by the name John Mark Moretti.

In the aftermath of the fight, Boswick, Radovicka, and fellow participant Chris Vanderweide recorded a video where Moretti congratulated himself for having “protected the Christian flag” from the man they assaulted. All three men were identified as participants in altercations at Hamilton Pride earlier in June.

Here’s Vanderweide, asking Boswick if he got more footage, bragging that he “showed them once again what happens,” and calling anti-fascists criminals.

This is very disturbing.

The assault victim’s statement, shared with the Anti-Racist Canada (ARC) Collective, described the events at the Eaton Centre as follows:

As is visible from the video and security footage, all I had done was usher families away from the Nazis within the Centre, and got suckerpunched after picking up one of the signs they dropped. I did not make any effort to fight back, instead allowing the attack on camera to unfold. You can clearly see me stop Ylli Radovicka (aka John Moretti) from utilizing the sharpened metal pole he had used as a weapon on others by grabbing the weapon and refusing to let go.

What’s not visible on video is Chris Vanderweide taking swings at passerby, including at a security guard’s head.

The anonymous man, who was taken to the hospital following the altercation, is apparently a Christian as well, describing his actions as “Christ-inspired nonviolence towards evil.”

So in essence, what we have here is a man wearing Christian slogans on his t-shirt helping his friends beat up another Christian over a disagreement about — among other things — whether Muslims are too inherently violent to belong in Canadian society.

What a time to be alive. 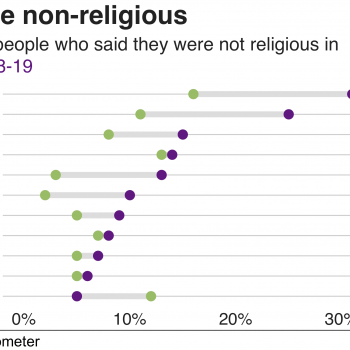 June 24, 2019
The Arab World Has Become Less Religious Over the Past Five Years
Next Post 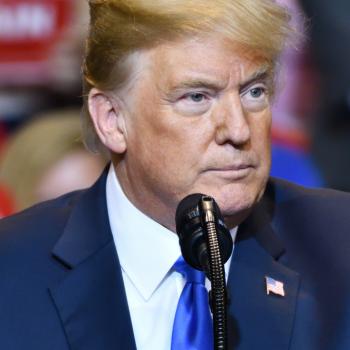