Christian Preacher: Taylor Swift’s New Song Is So Evil, “God Will Cut Her Down”

Taylor Swift‘s latest song, “You Need To Calm Down,” is already infuriating conservative Christians because of its (somewhat controversial) embrace of LGBTQ people and their culture and its call for viewers to support the Equality Act. The Christian bigots in the video also hold up signs saying things like “Adam and Eve, Not Adam and Steve,” “Get a Brain Morans!,” and “Homasekualty is sin!”

The latest Christian to voice the horrors of this video is right-wing radio host and “death to gays” pastor Kevin Swanson, who said on his “Generations” show Thursday that God would come after Swift for her sinning.

“So what do we say to Taylor Swift and her new concoction ‘You Need to Calm Down’?” asked Swanson, rhetorically. “I think we just tell Taylor Swift that she’s a fool. That she doesn’t fear God, and sooner or later, God will cut her down. And may she be broken at the Cross of Jesus Christ and realize she’s a sinner and she’s a sinner in desperate need of a savior, and that’s the message for all of us.”

So if I have God’s priorities straight, He’s going to strike down Taylor Swift for capitalizing on Pride month with a video preaching inclusivity and acceptance… but the president who puts kids in cages and just had a credible rape allegation made against him gets a free pass.

Swanson needs to work on his persuasion skills. 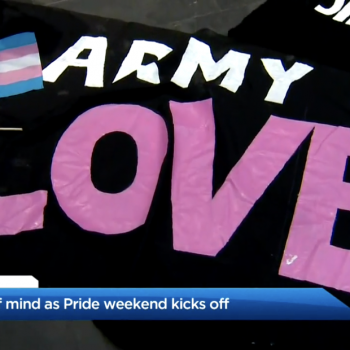 June 23, 2019 GoFundMe Shuts Down Fundraiser by Anti-Gay Australian Rugby Star Israel Folau
Browse Our Archives
What Are Your Thoughts?leave a comment