These Methodist Men Are Shocked to Learn What People Say to Female Pastors June 22, 2019 Beth Stoneburner

How do you help men understand what women have to deal with online? A few years ago, there was a viral video in which men were told to read messages sent to two female sports reporters… while the women sat right in front of them.

A similar stunt just took place during the North Carolina Conference of the United Methodist Church. In their video, male pastors were told to read aloud comments sent to female pastors — by leaders and members of the congregation. Even though the men in the video aren’t responsible for what other people said, you could sense their discomfort in saying these things out loud.

“I can’t concentrate on your sermon because you’re so pretty.”

“You do a really good job. But I think Scripture is more meaningful if read with a male voice.”

“I keep picturing you naked under your robe.”

For female ministers in the North Carolina Conference of the United Methodist Church, comments like these are just part of the job.

According to Religion News Service, this video was modeled after one produced by a Lutheran church last year. The Methodist conference leaders considered just showing that video but decided it would be more powerful to make their own. It was a wise move. The video shows that this kind of deep-seated sexism isn’t unique to one denomination. (Nor is it unique to one religion… or religion at all.)

Responses to the video have been overwhelmingly positive. Many men at the event claimed they had no idea that this is what women — religious leaders, no less — had to put up with on a regular basis. 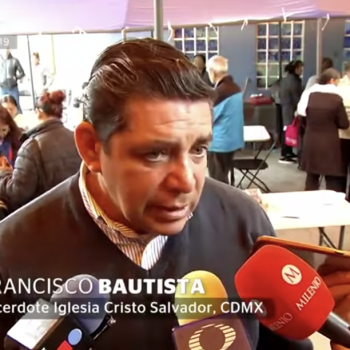 June 22, 2019
A Catholic Priest Who Gave a Eulogy for a Church Deacon May Have Been the Killer
Next Post

June 22, 2019 A Student Told Her Seminary's President She Was Raped. He Made Her Life Worse.
Browse Our Archives
What Are Your Thoughts?leave a comment