Earlier this month, a New York Times story revealed that when parents informed Village Church in Texas that their 11-year-old daughter had been abused while attending the church’s 2012 summer camp, Pastor Matt Chandler (below) downplayed the situation. He didn’t tell the congregation the allegations were connected to the former staffer. When he told the congregation the staffer was leaving the church, he said it was due to an “alcohol abuse problem.” He refused to talk to the Times about the situation.

It was utterly irresponsible.

It turns out it wasn’t the only example of his complete lack of empathy when it affects the church.

In 2011, Mo Murray, another staff member at Village Church, died by suicide. Rather than respond with compassion, Chandler shamed him from the pulpit. A transcript of his sermon that week, which resurfaced after the Times story, reveals how he spoke to the congregation about what Murray did.

In short, he describes the suicide as “selfish and sinful.”

What Mo did was selfish and sinful, and it was not beyond the saving work of Jesus Christ. All of Mo’s sins were just like yours and mine; they were future sins when Christ died on the cross. Which means Mo’s last sinful, selfish act was covered by the blood of Jesus.

… here’s the other thing I want you to hear me say. God did not abandon Mo in his darkest hour. Mo had all the weapons available to you, to me and to anyone else to combat the lies of the enemy in that moment. In a weak moment, he did not pick up those weapons, he believed in the lie and he took his own life.

Maybe he wanted credit for not saying Murray would go to Hell, something other pastors have said is the consequence of suicide, but it’s still wrong on so many levels…

Depressed people may be offered resources to help them cope but still be reluctant to take them. This doesn’t mean they don’t want the help — they don’t want to be a burden. They often genuinely believe that the world would be better off without them, and that killing themselves is essentially doing their friends and family members a favor. That’s the nature of depression; it’s an illness that lies to you and convinces you that you’re unworthy. It’s a disease, just like any other.

That’s why it’s concerning that another staffer at the church, who was tasked with helping people with depression, allegedly told a story about how he wouldn’t pick up the phone when a depressed congregation member called him because he wanted to teach that person to rely on God instead. (Did Murray ever try to reach out to that guy? Was that guy one of the supposed “weapons” that Murray avoided? We don’t know.)

Chandler could have used his pulpit to educate his flock about the nature of depression, and encourage other people who may be suffering from it. Instead, he shamed a dead man and created an environment where others in similar situations may resist help when offered. After all, why share your depression with a pastor who sees your emotions as falling short of God’s will? Why open up to a pastor who will eventually mock you as selfish and sinful in front of your church family?

His sermon isn’t directly connected to the way he handled an allegation of abuse, but both scenarios point to a man more concerned with his own reputation than acknowledging his own shortcomings and taking action to prevent further problems.

(via No Eden Elsewhere. Screenshot via Vimeo) 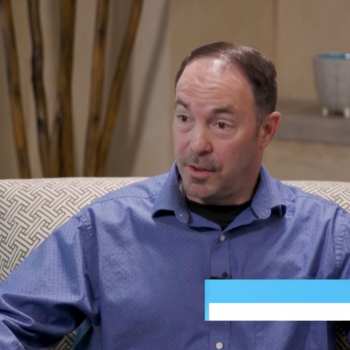