Creationist: The Bible is True Because God Says the Bible Is True June 21, 2019 Hemant Mehta

Creationist: The Bible is True Because God Says the Bible Is True

Because of that, Christian apologists usually go out of their way to attempt a more thoughtful response… but not Bodie Hodge of Answers in Genesis. In an interview for Pure Flix, he was asked about why the Bible should be trusted over, say, the Book of Mormon.

Well, let’s just start off with… the fact that the Bible is true. All the others are not true. That’s the biggest key. God is true. And His word that comes from Him is also true.

That’s kind of an easy way to answer that question. How do we know the Bible is true? By virtue of it coming from God, who is the truth.

Now what we start to see is all these alleged competition for the Bible but what’s the Bible really up against? If you look at all the Eastern religions — think Hinduism, New Age, Taoism, Jainism, these sorts of things — all their alleged holy books, whether it’s the Vedas or Upanishads or Bhagavad Gita or whatever these might be — those are just people’s suggestions about what they think might be religious. Oh, I think this, or I think that, or these ancients sages said this. But none of that comes with the authority of their God.

So those are just people’s ideas, opinions. They’re just arbitrary.

So that’s not even competition for the Bible, if you step back and think about it. Well, what about atheistic writings, whether it’s something from Charles Darwin or Charles Lyell or Richard Dawkins or Christopher Hitchens? These are just people’s ideas and whims and their views and belief systems. Once again, that’s just arbitrary. None of that is even competition for the God of the Bible in His revelation.

We look at mythologies and Paganism, or even stuff that comes from, say, Buddha or Confucius — they’re all just people’s opinions and ideas.

So, I mean, if you just step back and look at it, 3/4 of the world’s religions right there don’t have anything that can even compete with the Bible. Right off the bat, they’re just arbitrary people’s ideas. So those are automatically gone. But like you said, Book of Mormon. That’s one of them that
people want to bring up. Or the Qur’an is another one. Or Jehovah’s Witnesses literature, and so forth. Or even the Talmud.

People try to bring these up and say, “But what about these?” Well, now all of a sudden, we’ve entered what we call the counterfeits of Christianity — Something that looks or acts like Christianity, has like a Bible-type book, but then deviates from God and His word. But most people don’t realize when it comes to the Mormons, the Muslims, Jehovah’s Witnesses, and so forth, by and large, they agree the Bible’s true.

See, Muslims and Mormons? You screwed up. If your God had just said, “This is true,” you would have been so much more believable! Instead, you let the Christian God just swoop in with Creationist mythology and win the battle of ideas through spiritual cockiness.

If that’s all it takes for Hodge to believe in the Bible, no wonder he’s a Creationist. He doesn’t need evidence or logic. He just needs some self-proclaimed authority. It’s too bad one of Darwin’s finches didn’t say “Evolution is real” or Ark Encounter might not even exist. 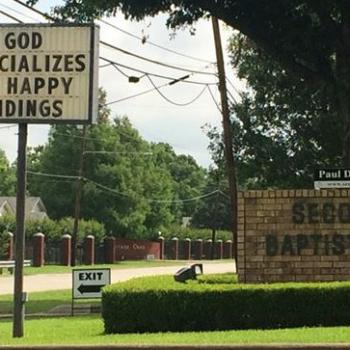 June 21, 2019 God Specializes in What Now?
Browse Our Archives
What Are Your Thoughts?leave a comment