The Freedom From Religion Foundation has decided, wisely, to end its battle over a huge unconstitutional tax break for religious leaders.

The perk is known as the “Parsonage Exemption” and it’s the loophole that allows ministers to deduct the cost of rent of their church-owned houses from their taxable income. (Christianity Today says 84% of senior pastors receive this exemption and it’s worth $20,000-$38,000 on top of their base salary.) It’s a perk that also benefits megachurch pastors who live in mansions, but the problem is that atheist leaders can’t get access to the same benefits.

FFRF’s co-presidents asked the government to give them the same benefit, but they were denied the opportunity because of their atheism. That’s when they sued over the matter. After various twists and turns, a U.S. District Judge ruled in their favor… but this past March, the Seventh Circuit Court of Appeals overturned the decision.

Had FFRF won, it would’ve been an arrow through the heart of religious privilege.

The big remaining question was whether FFRF would challenge the decision.

If they threw in the towel, there’s a chance a similar lawsuit could be filed in a more liberal circuit — or in the future when the Supreme Court is more likely to see this as anti-atheist discrimination.

That’s why FFRF is choosing to call it quits… for now.

We have full confidence in the legal merits of our challenge of the discriminatory pastoral housing allowance privileges. The IRS code preferentially favors the clergy as a special class, while penalizing those of us who are similarly situated in other 501(c)(3) organizations, particularly secular groups such as the Freedom From Religion Foundation that work to emancipate our society from religious dogma. It also penalizes ordinary taxpayers.

We did not feel the same confidence, however, in how the current Supreme Court would rule in our case, had we appealed. After “counting heads,” we concluded that any decision from the current court would put the kibosh on challenging the housing allowance for several generations.

The Freedom From Religion Foundation is right. This code rewarding clergy for fighting the “godless” (us, in other words) is unconstitutional. But we’re pleased that we have helped to educate taxpayers about the unfairness of a benefit exclusively for ministers and their churches.

It pains me to say it, but it’s the right call. Unfortunately, because conservatives have politicized the highest courts and turned them into rubber stamps for the GOP, the biggest factor when filing major lawsuits has to be the political makeup of the courts, not the legitimacy of your arguments.

It’s too bad. This law benefits religious leaders (including wealthy ones) with a perk that leaders of atheist organizations aren’t allowed to get. The government is actively discriminating against atheist groups with this law even if lawmakers never intended for that to be the case.

For now, however, the pro-religion rule will remain in place. 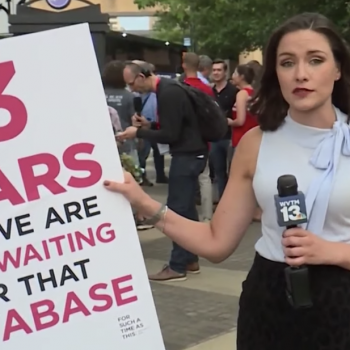 June 15, 2019 Protesters at Southern Baptist Convention Meeting Call for Database of Predators
Browse Our Archives
What Are Your Thoughts?leave a comment