Christian Preacher: I Stopped Fatal Accidents in My Hometown With My Tears June 4, 2019 Hemant Mehta

Christian Preacher: I Stopped Fatal Accidents in My Hometown With My Tears

Over the weekend, on The McFiles, hosted by right-wing host Chris McDonald, guest Ricci Wilson of World for Jesus Ministries explained how her prayers were responsible for shutting down a demonic presence near a traffic intersection in her community.

Which is a lot like saying you totally have a girlfriend, but she’s in another state so your friends can’t meet her, and oh, by the way, you two just broke up, and everyone else just has to take your word for it…

Now, you know, that was nearly 20 years ago, so I told my mom, I said, “Mom… every week there’s a major accident in this intersection. Every single week!” And she said to me, she said, “Why don’t you start praying and bind it up?”

Well, there you go. She prevented future accidents through the demon-slaying power of her tears.

She didn’t go to any of the many other intersections where accidents occur to save more lives, but at that one spot (which she doesn’t name, so we can’t verify any of the fatality numbers), she definitely prevented God from executing His Plan and killing random drivers.

Or whatever she thinks causes accidents since it’s apparently not the drivers themselves.

June 4, 2019
Here's Your Last Chance to Support My Podcast About the Pledge of Allegiance
Next Post 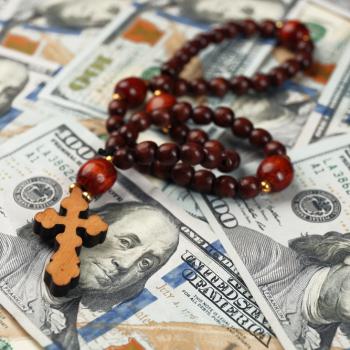