In a remarkably tone-deaf tweet over the weekend, Rhode Island Bishop Thomas Tobin argued that Catholics should avoid LGBTQ Pride events during June since “they promote a culture and encourage activities that are contrary to Catholic faith and morals” and are “especially harmful for children.”

A reminder that Catholics should not support or attend LGBTQ “Pride Month” events held in June. They promote a culture and encourage activities that are contrary to Catholic faith and morals. They are especially harmful for children.

Not only was Tobin denouncing events that celebrate inclusion and acceptance and love — which apparently violate Catholicism — he was blaming other people for harming children.

This is the same guy whose former diocese was named in the Pennsylvania grand jury report about sexual abuse in the Church and who reacted to the news by saying it wasn’t his responsibility to do anything about the allegations he knew about.

You have to work hard to be less self-aware than his tweet suggested. And people let him know it.

Kids are in far more danger at a catholic church than at a gay pride gathering.

When your church stops covering up child rape, then & only then do you get to contribute to a conversation on what may or may not be harmful to a child. Good talk.

You’re a Catholic priest, you promote a culture that’s contradictory to the Bible you hold dear by allowing men to get away with crimes not only against children but women. What I’m trying to say so elegantly is Go fuck yourself

May want to do a google search on “Catholic priests” and “children”.

WTF! Because not enough young boys will attend? What a horrible comment to tweet. What happened to all created equal in the eyes of god. I'm glad I've denounced religion. Being a parent I'm really glad I'm not filling my kids head with lies or teaching them to judge others. SHAME

Tobin later issued a statement — not an apology; never an apology — in response to the blowback:

“I regret that my comments yesterday about Pride Month have turned out to be so controversial in our community, and offensive to some, especially the gay community. That certainly was not my intention, but I understand why a good number of individuals have taken offense. I also acknowledge and appreciate the widespread support I have received on this matter,” he said. “The Catholic Church has respect and love for members of the gay community, as do I. Individuals with same-sex attraction are beloved children of God and our brothers and sisters.”

“Respect and love.” That’s what he thinks the Church offers people despite the catechism saying homosexual acts are “intrinsically disordered” and despite all the opposition to LGBTQ rights.

He’s more upset that LGBTQ people are celebrating their self-worth and dignity than he’s ever been about thousands of children getting raped by his colleagues.

Tobin isn’t alone, though. Many Catholic priests share his bigotry and no amount of rhetorical maneuvering from less hateful priests is enough to oppose the fundamental doctrine of the Catholic Church.

The Church has no love for LGBTQ people. The problem with Tobin is he said it out loud with an additional dose of irony.

June 3, 2019
Ex-Naturopath Prevails in Cancer Quack's Defamation Lawsuit Against Her
Next Post 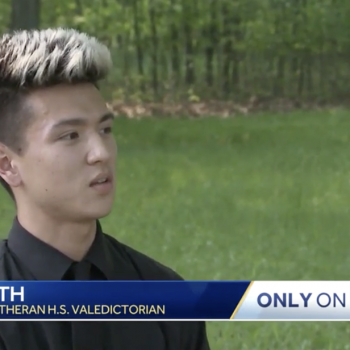