Research Presented at Vatican Shows That Anti-Atheist Stereotypes Are Inaccurate May 28, 2019 Hemant Mehta

Research Presented at Vatican Shows That Anti-Atheist Stereotypes Are Inaccurate

Here are two things you never want to hear when it comes to a newly released survey: We got money from the Templeton Foundation and we’re presenting our findings at the Vatican. Neither is disqualifying but both usually require explanations. (The Templeton Foundation has a long history of funding projects that have a pro-religion slant.)

In any case, researchers from the University of Kent took that Templeton cash to study non-believers in a way we’ve rarely seen, and their first report is now out. They spoke with atheists and agnostics from six different countries (Brazil, China, Denmark, Japan, the UK, and the USA) to get a broader understanding of non-religiosity.

How did they know who was atheist and agnostic? In their survey, they asked people for the most accurate description of their belief in God. Atheists were the ones who said “I don’t believe in God.” Agnostics said “I don’t know whether there is a God, and I don’t believe there is any way to find out.” Those seem fine enough out of seven possible options.

While the graphs are a chore to read, the findings are fascinating. Here are a few things that stood out to me.

1) Most atheists don’t call themselves “atheists.” 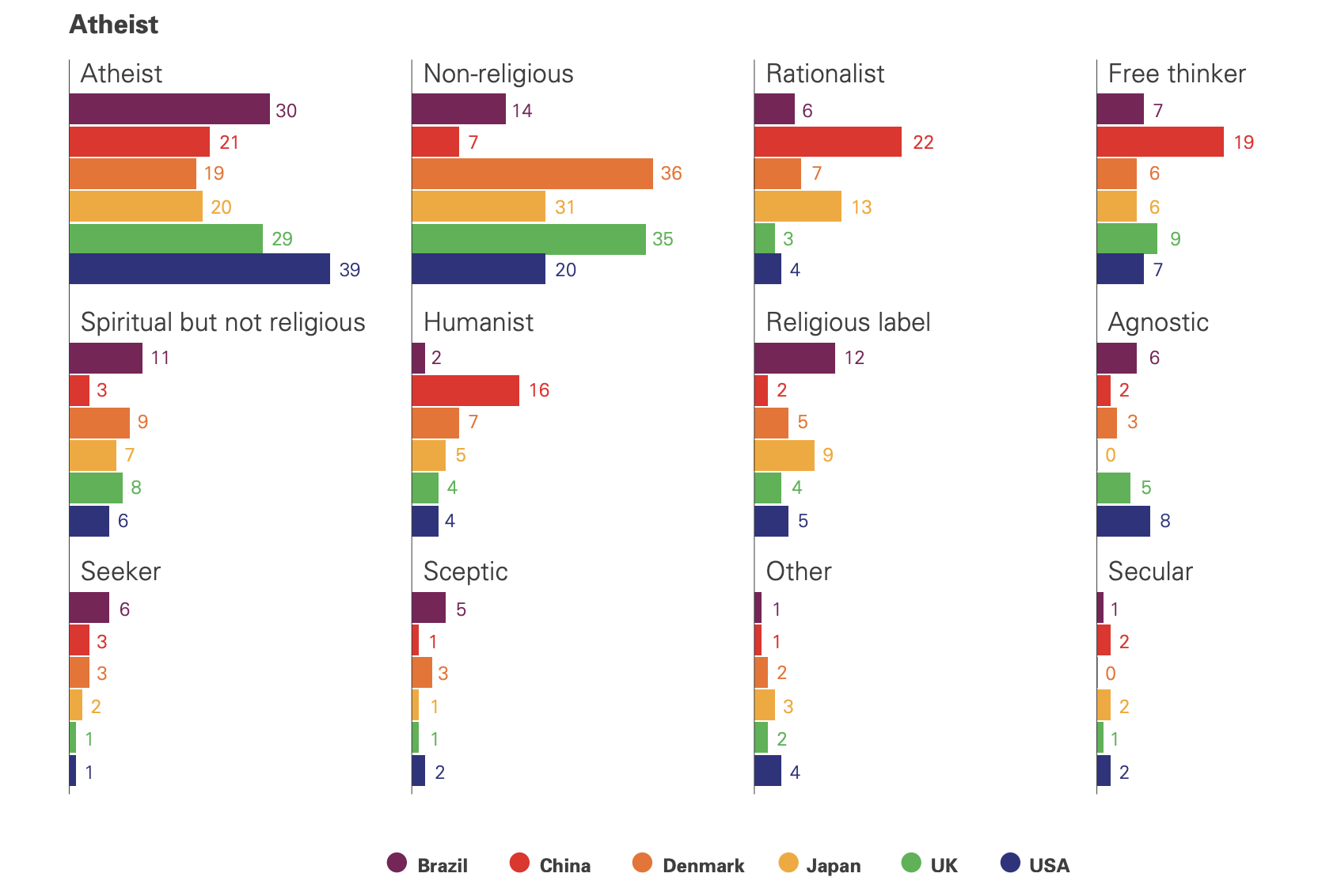 Because of that, the researchers correctly conclude that anyone else trying to analyze atheists merely from a list of those who identify with that word would be doing a disservice because they’re undercounting us.

All of this is important for two main reasons. Firstly, it means that social-scientific studies of atheists or agnostics which focus only on those who self-describe in this way — e.g., typically as a write-in option on a survey’s ‘Other (please specify)’ category — are limited to only a very small, and likely atypical, subset of de facto atheists and agnostics. Secondly, it underscores the point that there is no single term — or discrete set of terms — for referring to these people which a majority of them would actively choose for themselves…

2) When it comes to ethics and morality, atheists are just like everybody else.

There’s a pernicious stereotype that atheists are immoral because we don’t have God in our lives. But, in fact, our beliefs are really no different from society at large. This chart takes a while to understand, but once again, look at the dark blue/purple bars on the far right representing the U.S. The blue is atheists and the purple is the general population. Look at how similar they are for each question. 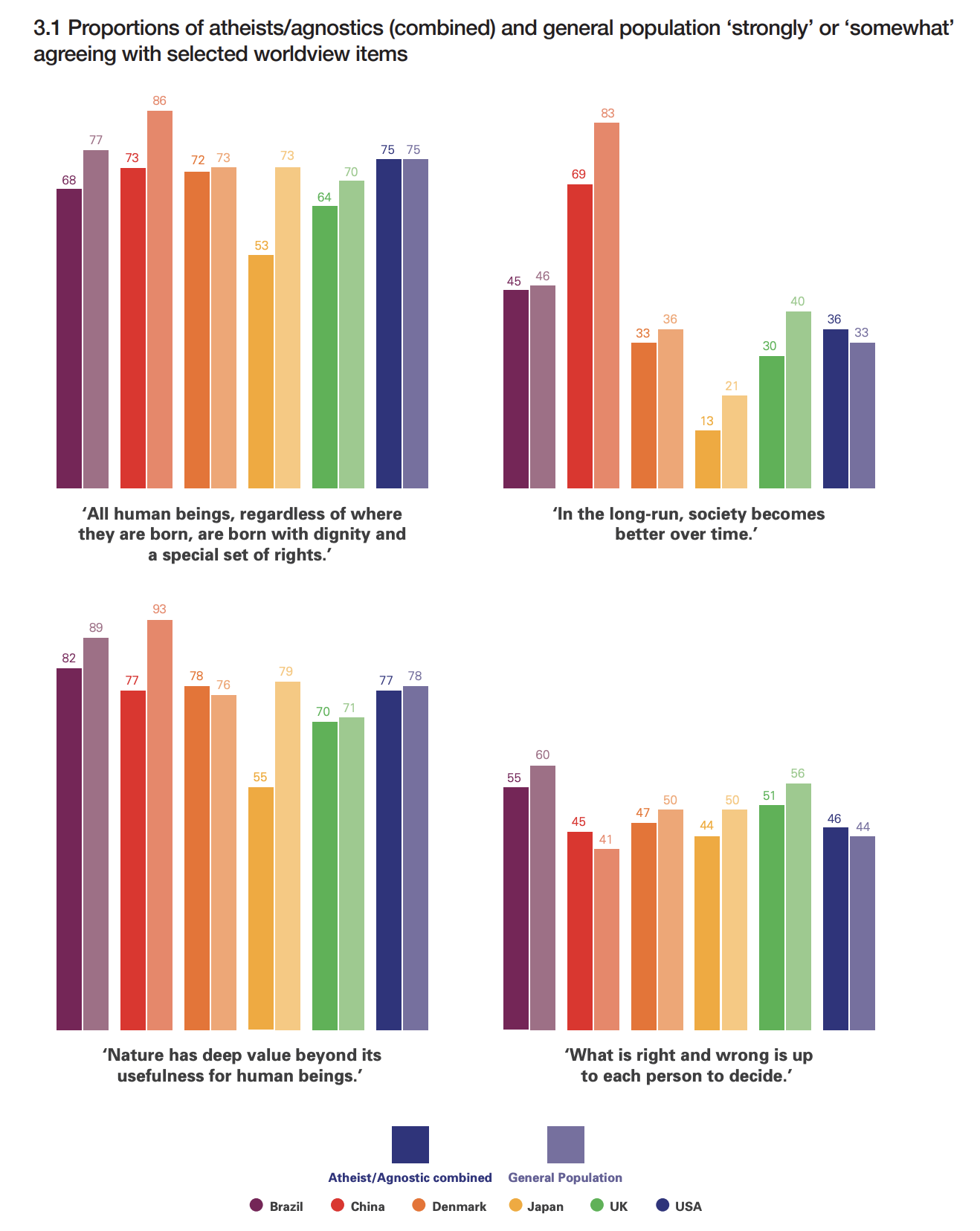 … perhaps challenging common suppositions: with only a few exceptions, atheists and agnostics endorse the realities of objective moral values, human dignity and attendant rights, and the ‘deep value’ of nature, at similar rates to the general populations in their countries.

3) Atheists are just as confident about our beliefs as everyone else.

Atheists have been called “aggressive,” “militant,” “smug,” and any number of other terms that suggest we’re waaaaaaay too confident about our beliefs, and far more confident than religious people. (You’ll rarely hear someone use the phrase “humble atheist.”) But the survey found that, in the U.S., atheists are equally as confident in our views about God as the general public. (Again, look at the blue shapes on the far right. Atheists are the square. The general public is a circle. We’re practically on top of each other.) 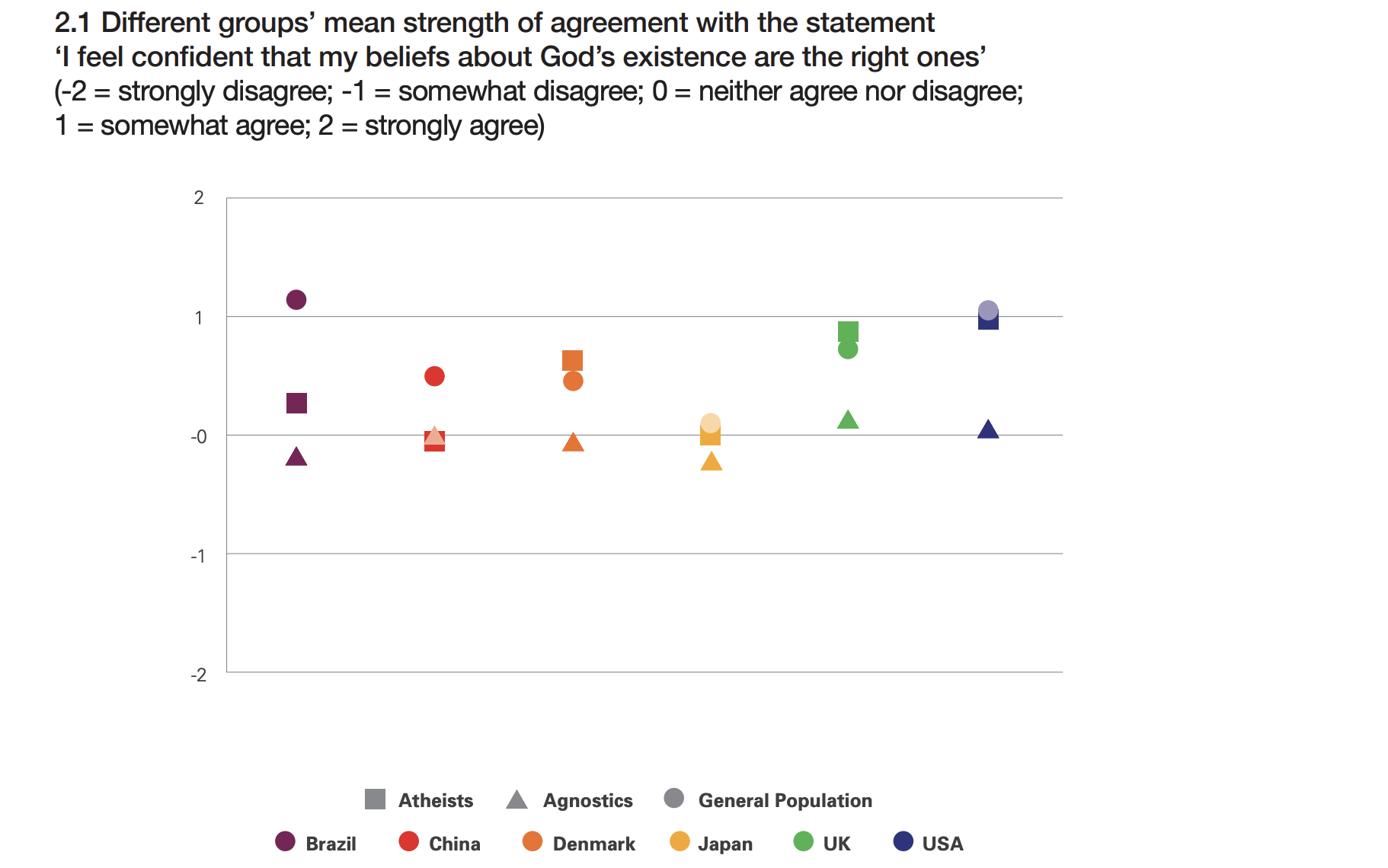 The researchers say, “contrary to some popular suppositions, being an atheist does not necessarily entail a high level of confidence or certainty in one’s views.” That almost sounds like a back-handed compliment but they also note that “Popular assumptions about ‘convinced, dogmatic atheists’ do not stand up to scrutiny.” Our critics should take that to heart.

All of this will be presented at the “Understanding Unbelief” conference at the Vatican this week. The event is co-hosted by the Pontifical Council for Culture, which is the Church’s arm “responsible for dialoguing with non-believers.”

Speaking about the research project, [University of Kent sociologist Dr. Lois] Lee said: ‘These findings show once and for all that the public image of the atheist is a simplification at best, and a gross caricature at worst. Instead of relying on assumptions about what it means to be an atheist, we can now work with a real understanding of the many different worldviews that the atheist population includes. The implications for public and social policy are substantial — and this study also stands to impact on more everyday interactions in religiously diverse societies.’

[Queen’s University anthropologist Dr. Jonathan] Lanman said: ‘Our data directly counter common stereotypes about unbelievers. A common view of unbelievers is that they lack a sense of objective morality and purpose but possess an arrogant confidence and a very different set of values from the rest of the population. Our representative data across six diverse countries show that none of this is true. In a time when our societies seem to be growing more and more polarized, it has been both interesting and encouraging to see that one of the supposed big divides in human life (believers vs. unbelievers) may not be so big after all.’

Of course, religious people would’ve known all this much earlier if they just listened to atheists instead of dismissing or demonizing us.

(Featured image via Shutterstock. Thanks to Emma for the link) 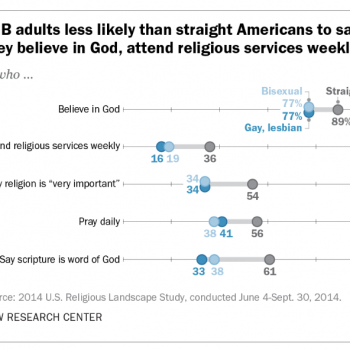 May 27, 2019
Pew Research: 41% of Gays/Lesbians/Bisexuals Have No Religious Affiliation
Next Post 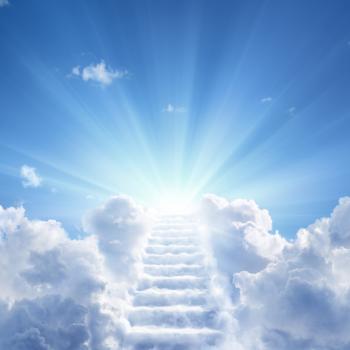