OK Officials Praying in an Emergency Isn’t a Welcome Gesture for All Employees May 26, 2019 Hemant Mehta

Tornados have been ravaging parts of Oklahoma over the past week, and you can imagine all the hard work local officials are doing to help citizens.

The Republican mayor of Tulsa, G.T. Bynum, just published an emotional post on Facebook describing what he saw at the city’s Emergency Operations Center on Wednesday night. Everyone had been working non-stop, stress levels were high, and first responders were out on the streets. Governor Kevin Stitt stopped by the center, and Bynum asked if he wanted to say anything.

Stitt offered a prayer and a picture was taken as everyone seemed to bow their heads.

This isn’t just a church/state separation issue though. (No one’s going to challenge what an elected official does in an impromptu emotional moment like this.)

I received an email from a city employee in Tulsa who has been among those working long shifts, helping neighbors escape flooding, and filling sandbags. He finally had a little bit of a break today, and this post from Bynum was one of the first things he saw online. It was deeply upsetting for him.

I don’t know why this has hit me so hard, but for the first time in a REALLY long time, I felt LEFT OUT. Alone. Unappreciated… Maybe it’s just the exhaustion and the stress and lack of sleep… Maybe instead of our Governor doing his prayer and my literal top boss [the mayor] lauding it, I could have just had a handshake? A pat on the back? Maybe a slice of pizza?

… The mayor has thanked us workers via email and on TV. I do appreciate that.

I just wonder if I’m the only atheist city employee or employee of another religion other than Christianity [who] felt this way. There’s no way everyone in that room was a Christian. Don’t believe it for a second.

This is the problem with government officials invoking religion — even in an emotional moment and certainly when they’re addressing city employees. Assuming everyone shares the same faith is ignorant at best and dismissive at worst. Why engage in a form of worship that, by definition, excludes some people when an honest message of appreciation would’ve gone a long way?

That’s not to say Bynum or Stitt meant to do that, but they seem utterly unaware of how their words come across to some of the very people they’re trying to thank. And if one of them feels this strongly about what they did, how many more felt the same way but wouldn’t ever say anything about it? 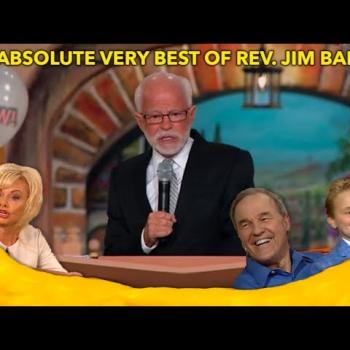 May 26, 2019
This Compilation of Televangelist Jim Bakker's Strangest Moments Is Disturbing
Next Post 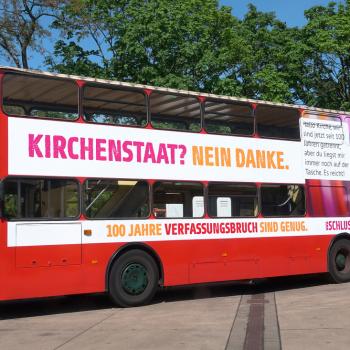 May 27, 2019 German Bus Ad Calls for Church/State Separation: "A Papal State? No Thanks."
Browse Our Archives
What Are Your Thoughts?leave a comment