If you’ve been paying any attention to Project Blitz, the conservative Christian strategy for pushing their religion through the government through a variety of methods, you know one of the goals is to get Bible classes in public schools.

Advocates say the classes are secular in nature, but every district that offers them are opening themselves up to possible legal troubles if the classes aren’t taught objectively. If Florida’s version of the bill becomes law, every school district would be required to offer the class — and find someone qualified to teach it, even if it comes at the expense of hiring another English or science teacher.

The point is: These classes are more trouble than they’re worth, and the Christian Right doesn’t care. They just want Bible classes. Once the Bible gets in schools in a formal way, it’s much easier to twist objective analysis into straight-up proselytizing.

Now, a new Hill-HarrisX survey finds that only 12% of Americans support the idea of Bible classes when other religions don’t receive the same treatment — which is exactly what Project Blitz is pushing for. But the takeaway, really, is that no one has any clue what schools ought to be doing. 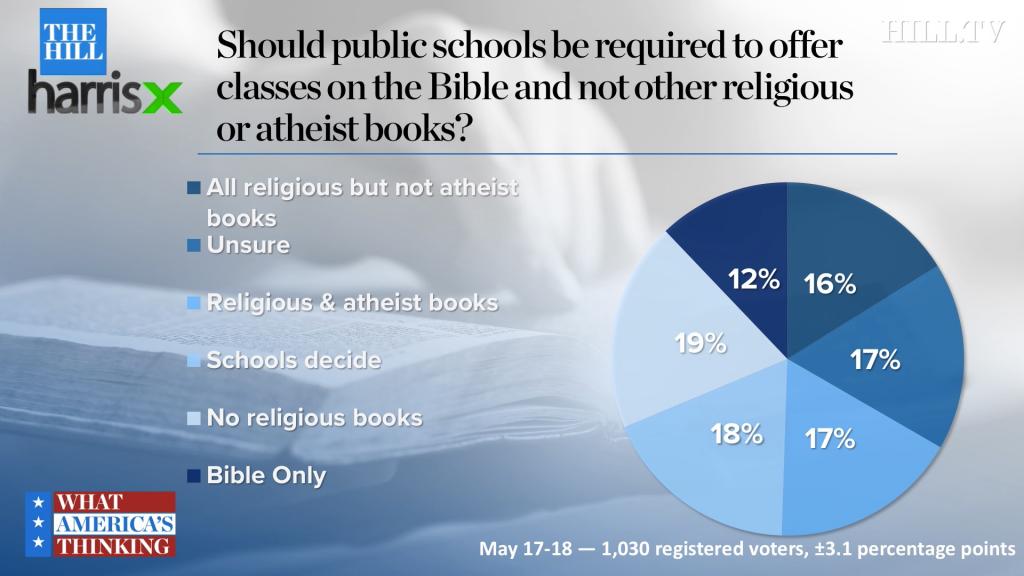 A third of respondents, 33 percent, said states should require schools to offer new history classes on all major religions, with a little over half of that group — 17 percent of the total sample — saying the class topics should also include the history of atheism.

Nineteen percent of survey participants said schools should not be allowed to teach students about any religious books, while 18 percent said that schools should be able to determine what courses to make available about religion or atheism.

Seventeen percent of respondents said they were unsure what their opinion on the matter was.

“Most of the time in polling, we don’t see ‘unsure’ answers close to 20 percent like it was in this particular poll,” Natalie Jackson, research director at the Public Religion Research Institute, told Hill.TV on Friday. “I just think there’s no real consensus right now on the type of policy.”

The support for Bible (and only Bible) classes is 15% for people without college degrees, but it drops to 6% when you ask college graduates. There’s also a political party divide: 22% of Republicans support Bible classes compared to 6% each for Democrats and Independents.

In other words, there’s only a small group of people pushing for the kind of legislation that the Religious Right wants to see in public schools… The bad news is that those people have a ton of political power.

Americans United for Separation of Church and State says that 11 states currently have pending legislation regarding Bible-only religion classes.

The sad thing is that religious education, taught objectively and thoroughly (at least for high school), would be incredibly useful. That’s not what the Christian Right wants, though. The classes they’re pushing for are just a way to promote the idea of Christian supremacy. Only the Bible matters (no matter how many people don’t believe in it). Only Christianity has cultural influence. No other belief systems matter.

In other words, if a group of Muslims were pushing for objectively taught classes on the Qur’an, the Christian Right would call it a backdoor approach to promoting Sharia Law. But when it’s their holy book, it’s perfectly acceptable. 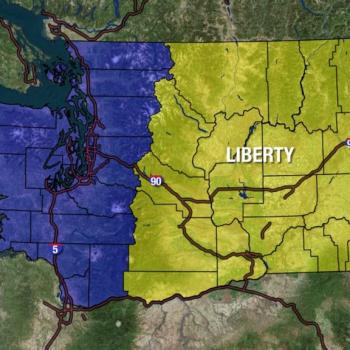 May 25, 2019
WA Lawmaker Attends Fundraiser for Liberty, a Proposed 51st State for Christians
Next Post 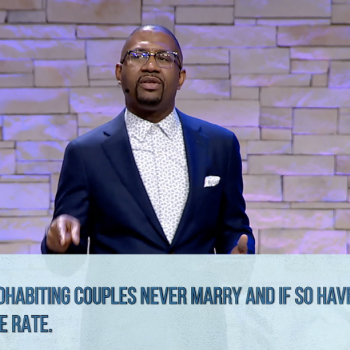