The investigation actually began last summer (under her Republican predecessor) and Nessel said in a February press conference that looking into child sex abuse in the state’s seven dioceses could uncover more than 1,000 victims over several decades. To that end, she had asked the dioceses to stop investigating themselves — since they can’t be trusted — and leave that job to her office.

Today we learned that we’re already seeing results even though her office says it’s only worked through about 5-10% of the documents they seized.

Five former Catholic priests have been charged with criminal sexual conduct, Attorney General Dana Nessel said at a news conference. But hundreds, or even thousands, of alleged victims could still remain across the state, she said.

“This is just the tip of the iceberg,” she said. “We anticipate many more charges and arrests.”

Those priests were arrested in Arizona, California, Florida and Michigan. Another faces extradition from India. And that’s before we get into the rest of the documents or the approximately 450 tips that came into a website set up by Nessel’s office.

The five priests were hit with 21 charges of abuses against five separate victims.

The two others are Vincent DeLorenzo, who most recently served at Holy Redeemer Church in Burton, and Jacob Vellian, who served in St. John the Evangelist Parish in Benton Harbor.

The alleged victims in the cases included four boys and one girl between the ages of 5 and 26.

Let’s hope this is just the beginning of the arrests.

And for anyone defending the Church, remember that respect has to be earned. The Catholic Church lost that battle a long time ago and they can’t be trusted to police their own. We are fortunate that some elected officials are finally looking out for the victims instead of the powerful. 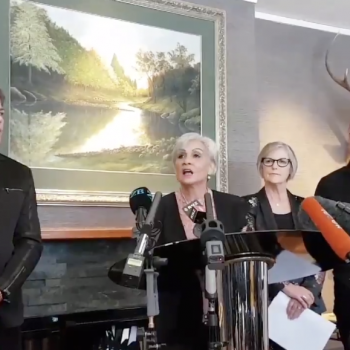 May 24, 2019 Ark Encounter Sues Insurers for Not Covering $1,000,000 Worth of... Rain Damage
Browse Our Archives
What Are Your Thoughts?leave a comment