California’s new comprehensive health education curriculum includes sections about what it means to be LGBTQ so that even kids in kindergarten classes are aware that there are other identities out there even if they don’t fully understand what that means. It’s education, not indoctrination, obviously, since it’s not like kids turn gay upon hearing the word.

In good conscience, they must say NO to the school authorities and YES to the Lord. It’s time to declare to the schools of California, “Quit using our children as pawns in the culture wars! Quit sexualizing our kids!”

We’re talking about kindergarteners — little children just 5-6 years-old — being indoctrinated with transgender talking points. Indeed, “a book for kindergarten through third grade… teaches kids that they can be a boy, girl, neither, gender queer or gender fluid and that adults might not understand their gender identity.”

Parents, say NO to your impressionable little ones being exposed to trash like this. How dare the school bring such confusion to your precious children.

The very book he links to doesn’t say kids get to choose their gender identity, only that those options exist. They may be cisgender or straight, but their classmates might not be. Better to understand that now instead of allowing those differences to lead to bullying down the line. That understanding is what Brown can’t understand.

These lessons aren’t advocating anything. Rather, because trans kids may not yet have the words to describe their identity, schools are providing age-appropriate lessons that basically explain 1) that trans people exist and 2) what that means. That’s it.

Bad parents are still entitled to teach kids that such identities are sinful, if they want. But simply creating awareness, as they do in California, isn’t some secret attempt to make children select their favorite gender identity before a pastor can put a stop to it.

Not that Brown can handle that nuance. He’s calling for parents to pull their kids from the classes in the name of God.

Now, across California, millions of other parents need to join together to say to the Nanny State: “No. You will not corrupt our children. You will not brainwash our little ones. You do not have the moral or spiritual authority to indoctrinate them. And if you refuse to listen to us, we will pull our kids out of your schools until you honor our demands.”

This is just faith-based, hate-fueled fear-mongering. It’s the only subject in which Michael Brown is an expert.

May 23, 2019
Mat Staver Accidentally Admitted the Truth About Anti-Abortion "Heartbeat Bills"
Next Post 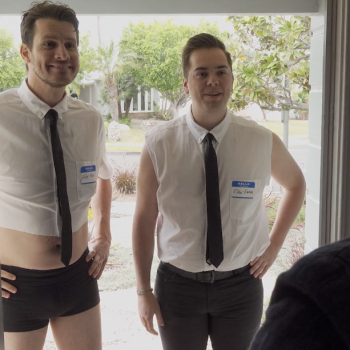