End Times broadcaster and anti-Semite Rick Wiles, last seen explaining how pro-choice people would be eternally aborted by demons in Hell, accidentally said the quiet part out loud on that very same episode of “TruNews.”

After blaming abortions on “powerful, influential rich Jews” — because he’s a raging bigot — he admitted that this was all part of a larger plan to impose conservative Christianity on the entire nation.

He was reacting to a column in an Israeli publication in which the writer said the new law was a threat to her personal “religious freedom as a Jew.”

“We Christians are standing up and pushing out Zionism,” Wiles said. “That’s what we’re doing. Zionism brought the slaughter of 65 million babies to America and we’re going to end it and we are going to impose Christian rule in this country.”

“Why are you imposing Judaism on me?” he asked. “Because that’s exactly what’s been done in America since 1973 with Roe v. Wade. Judaism was imposed on me, on my Christian nation and we became a Jewish nation that kills babies. That’s against my Christian beliefs … Judaism became the law of the land in America. That’s precisely what the courts have ruled. They have based their rulings on the Zohar, on the Talmud, and now we have Zionistic Talmudic law ruling this country and resulting in the death of millions of babies. And Ms. [Debra Nussbaum] Cohen, we Christians are standing up and we’re telling you that we’re done with Zionism, we’re done with your values. We are going to impose Christian values in America again, whether you like it or not.”

Setting aside the conspiracy theory for a moment, he’s flat-out saying that the abortion ban is a Christian law that everyone should have to live by. It’s not about the fetus. It’s sure as hell not about the women. It’s about his religion. That’s it.

This is the same guy who sounds all the alarms when it comes to Sharia Law… but Christians oppressing everyone else is perfectly fine with him.

Remember: This guy may be a conspiracist, but on this issue, his views about pushing Christianity on the country are no different from many other Republicans. They invoke God when they talk about abortion for a reason: They believe the role of government is to spread their intepretation of the Gospel. 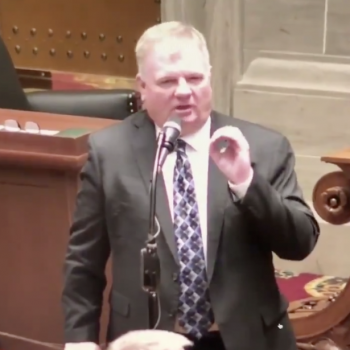