Pat Robertson: God Is “Going To Get Rid” of America if the Equality Act Passes May 14, 2019 Hemant Mehta

Pat Robertson: God Is “Going To Get Rid” of America if the Equality Act Passes

Pat Robertson is the latest Christian to denounce the Equality Act, which would add explicit non-discrimination protections for LGBTQ people to federal civil rights law.

We’ve already seen Liberty Counsel’s Mat Staver pretend it’ll lead to pedophilia. The Church of Jesus Christ of Latter-day Saints said yesterday they also opposed the Act because they wanted “fairness for all.” It’s the Mormon version of saying “All lives matter” — it completely misses the point.

And yet Robertson one-upped everyone when he said on today’s episode of The 700 Club that God would flat-out destroy the country if the Equality Act passes.

“This is a devastating blow to religious freedom and to the sanctity of America,” he said. “If you want to bring the judgment of God on this nation, you just keep this stuff up. You know, I was reading in Leviticus where it said, ‘Because of these things, the land will vomit you out.’ Vomit you out. I think God will say, ‘I’ve had it with America, if you do this kind of stuff, I’m going to get rid of you as a nation.’”

Considering marriage equality and the overturning of the anti-sodomy laws didn’t destroy the world yet, it’s hard to imagine letting gay people buy cake would even elicit a raise of God’s eyebrow.

So either God’s on a huge time delay or Robertson is making this up as he goes along.

The Equality Act has only been introduced in the House so far. Even if it passes there, it’s unlikely to get through the Senate. The Trump administration has already announced opposition to it (because Jesus). Still, it’s an indication of what Democrats stand for against the religious bigotry of Republicans. 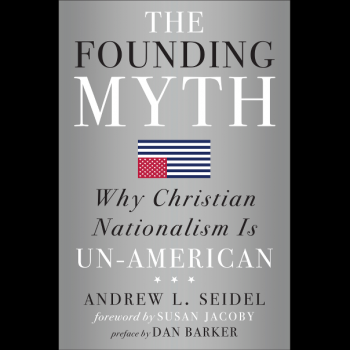 May 14, 2019
Christian Nationalism is "Warping and Torturing" America's Values, Says Author
Next Post