For many years now, I’ve been delighted to call Andrew Seidel a friend. He’s an attorney for the Freedom From Religion Foundation and someone I’ve often relied on to clarify my own thinking about various church/state separation issues.

Naturally, when it came to writing his first book, he didn’t go for low-hanging fruit. He went directly after the myth that we live in a “Christian Nation.” Beyond just debunking that lie, he explains in the book why those conservative Christian ideals are antithetical to the values many of us hold as patriotic Americans. He purposely refers to his book as an “assault” on that myth — but a necessary one because in the process he’s defending one of the founding principles of this nation.

The book is called The Founding Myth: Why Christian Nationalism Is Un-American and it’s out today. 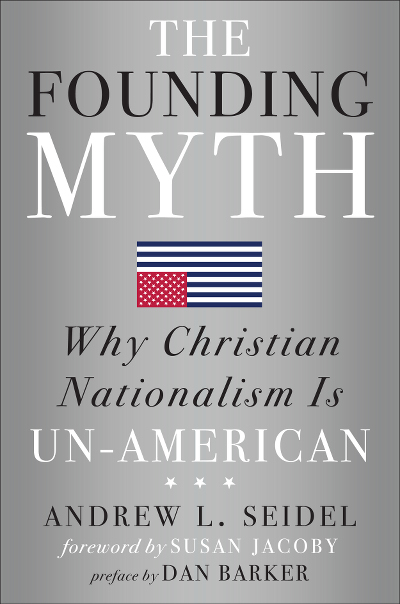 In the excerpt below, Seidel offers an overview of the book and explains why he’s so passionate about this topic:

Christian nationalism has already had a massive impact on our government and its policies, including foreign policy. When Trump moved the US embassy to Jerusalem, Christian nationalist mouthpieces on Fox News declared that he had “fulfilled… biblical prophecy” and related the move back to “the foundation of our own Judeo-Christian nation.” Christian nationalism affects immigration policy, as we’ve just seen. Its effects on education policy could be felt for decades, and not just because Secretary of Education Betsy DeVos was a dream appointment for the Christian nationalist goal of dismantling public schools through vouchers and school choice. It has denigrated our concept of equality, including by meddling with the legal definition of dis-crimination and attempting to redefine religious freedom as a license to discriminate, and it has sought to restrict women’s rights and even the social safety net. And, of course, Christian nationalism features heavily in the culture wars.

What I’m Arguing and Who I Am

This objective is particularly important because history is powerful. George Santayana’s warning that “those who cannot remember the past are condemned to repeat it” rings true because the past influences the present. Unfortunately, history’s power does not depend on its accuracy. A widely believed historical lie can have as much impact as a historical truth. President John F. Kennedy explained to Yale’s graduating class of 1962 that “the great enemy of the truth is very often not the lie — deliberate, contrived, and dishonest — but the myth — persistent, persuasive, and unrealistic. Too often we hold fast to the clichés of our forebears… We enjoy the comfort of opinion without the discomfort of thought.” Powerful historical falsehoods are particularly harmful in constitutional republics such as the United States. Courts may uphold practices that would otherwise be illegal by relying on comfortable myths instead of legitimate history. Legislators might promulgate laws based on historical clichés instead of reality. Each law or court decision based on revisionist history provides a new foundation from which the myth can be expanded. The myth feeds off itself, lodging more firmly in our collective consciousness.

When James Madison protested Patrick Henry’s proposed three-penny tax to fund Christian ministers, he wrote a landmark in American history and law: the “Memorial and Remonstrance against Religious Assessments” (1785). Madison’s arguments overwhelmed Henry and convinced Virginians to strike down the proposed tax. Madison argued that even small, seemingly insignificant battles to uphold our rights must be fought on principle; otherwise the infringements become authority for future violations of our rights:

It is proper to take alarm at the first experiment on our liberties. We hold this prudent jealousy to be the first duty of Citizens, and one of the noblest characteristics of the late Revolution. The free men of America did not wait till usurped power had strengthened itself by exercise, and entangled the question in precedents. They saw all the consequences in the principle, and they avoided the consequences by denying the principle.

Because of history’s power, myths can endanger our liberty. It is our duty as citizens to guard the truth and prevent these myths from becoming tangled in legal and legislative precedents. When Christian nationalists are permitted to use the machinery of the state to impose their religion on us all, even if they do so during times when dissent is punished, these constitutional violations are remarkably tenacious. Christian nationalism operates like a ratchet or a noose, with each violation tightening its hold and making it more difficult to undo. Worse, the violations are used to justify other violations, so the tightening proceeds apace.

Unfortunately, there are two Christian nationalist myths we failed to guard against. These two myths encompass all the lesser myths that Trump and Project Blitz feed into. The first is that America was founded as a Christian nation. The claim is demonstrably false as revealed by any number of documents from the time, including America’s godless Constitution, Madison’s Memorial, or the Treaty of Tripoli, which was negotiated under President George Washington and signed by President John Adams with the unanimous consent of the US Senate in 1797, and which says that “the Government of the United States of America is not, in any sense, founded on the Christian religion.” Most people with even a modest grasp of US history, law, government, or politics can debunk this divisive fabrication.

This book does not depend on the specific language of a single treaty, however applicable it may be — “not in any sense founded on the Christian religion” is admirably clear. Nor will it focus on the first myth, that America is a Christian nation. According to Bertrand Russell, religious apologists “try to make the public forget their earlier obscurantism, in order that their present obscurantism may not be recognized for what it is.” So do Christian nationalists. They abandon their earlier obscurantism, the first myth, in favor of a new one: the subtler argument that our nation is founded on Judeo-Christian principles. Christian nationalism hinges on this second myth and, unlike the first, it is broadly accepted.

Not only is it fair to say that Judeo-Christian principles are un-American, we must. The word “un-American” might make some squeamish because of the value judgment inherent in it. But America is in a fight for its values — its soul, if you prefer — and Christian nationalism is warping and torturing those values, dragging this country down a dark hole. To hesitate to describe this identity with apt phrases because they may be unpleasant is to cede the American identity to an imposter. To refuse to label that which is antithetical to America is to watch Christian nationalists hijack our nation.

This book is an assault, but it’s also a defense, a defense of that quintessentially American invention, the “wall of separation between church and state.” I am a watcher on that wall. As a constitutional attorney with the Freedom From Religion Foundation, I defend the First Amendment to the US Constitution by ensuring that government officials do not use the power of a public office to promote their personal religion. It is my duty to take alarm at the first experiment on our liberties. We handle thousands of state/church complaints every year. Without fail, recalcitrant violators and their vocal supporters argue that they can impose prayer on kindergartners or pass out bibles in public schools or display the Ten Commandments on public property because this is a Christian nation founded on Christian principles. In short, I rebut this claim for a living, and I’ve dedicated my career to this fight because it is so important.

The Founding Myth is now available online and in bookstores.

(Reprinted with permission from The Founding Myth: Why Christian Nationalism is Un-American © 2019 Andrew Seidel, published by Sterling Publishing Co., Inc.) 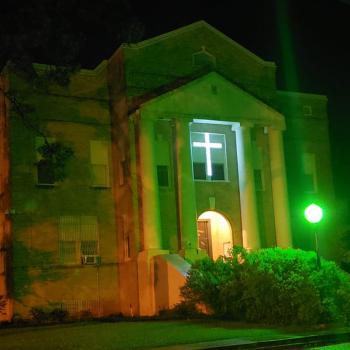 May 14, 2019
Texas Preacher: Atheists Defending the Constitution Should "Go Suck a Tailpipe"
Next Post 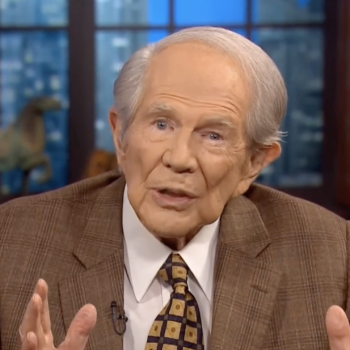