This Christian Claims No One Said “Merry Christmas” at Drive-Thrus Under Obama May 9, 2019 Hemant Mehta

Conservative Christian commentator Matt Couch said in a bizarre rant today that he’s grateful to Donald Trump for the fact that people are saying “Merry Christmas” again. Because apparently, no one was allowed to do such a thing when Barack Obama was in office.

MAGA broadcaster Matt Couch is eternally grateful for President Trump ("a chosen man") because now people say "Merry Christmas" when he is at the Arby's drive-thru. pic.twitter.com/Aw3pk1Qqaq

President Trump is a chosen man. And if you don’t believe that, you just don’t understand how things are working out in this country, in this world. You don’t have to like him, but unfortunately for you, facts matter. Facts unfortunately matter.

People say “Merry Christmas” now when you go through the drive-thru. That didn’t happen eight years ago, folks. And, once again, if you say it did, you’re a liar. I’m sorry. I hate to be that mean. But if anyone tries to tell me that, eight years ago, when Barack Hussein Obama was in the middle of his eight-year run, if any of you really think that people were saying “Merry Christmas,” hell no, they weren’t. They were not!

And I’ve noticed the last two years, it doesn’t matter if I go through an Arby’s or a Chick-fil-A. People are saying “Merry Christmas.” They weren’t doing that four or five years ago. President Trump has brought that back.

This may come as a shock to the MAGA crowd, but mentioning “Christmas” (even in a drive-thru window) was not, in fact, illegal under the Obama regime. It happened everywhere. All the time. There was no rule saying mentions of it had to be below 30 decibels, either. And — this may be shocking to Couch — Obama himself sometimes said the phrase. In public.

Donald Trump is claiming victory in the War on Christmas, saying he brought "Merry Christmas" back to the White House. We found plenty of evidence proving him wrong… #inners pic.twitter.com/fGBSbYybvx

What was that thing about facts mattering…? 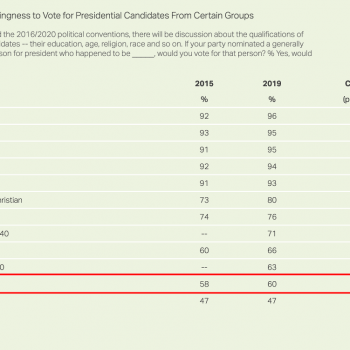 May 9, 2019
A Record 60% of Americans Say They Could Vote for an Atheist President
Next Post

May 9, 2019 Catholic League: PA Lawmaker Filming Abortion Protesters Needs "Criminal Probe"
Browse Our Archives
What Are Your Thoughts?leave a comment