Georgia’s Republican Gov. Brian Kemp signed into law this morning the so-called “heartbeat” measure, which he hailed as the “toughest abortion bill in the country.” It bans abortions if a fetal heartbeat can be detected — something that occurs before some women even know if they’re pregnant — and subjects women to life imprisonment or the death penalty.

Slate’s Mark Joseph Stern explains the extreme nature of the bill along with potential consequences:

The primary purpose of HB 481 is to prohibit doctors from terminating any pregnancy after they can detect “embryonic or fetal cardiac activity,” which typically occurs at six weeks’ gestation. But the bill does far more than that. In one sweeping provision, it declares that “unborn children are a class of living, distinct person” that deserves “full legal recognition.” Thus, Georgia law must “recognize unborn children as natural persons” — not just for the purposes of abortion, but as a legal rule.

This radical revision of Georgia law is quite deliberate: The bill confirms that fetuses “shall be included in population based determinations” from now on, because they are legally humans, and residents of the state. But it is not clear whether the bill’s drafters contemplated the more dramatic consequences of granting legal personhood to fetuses. For instance, as Georgia appellate attorney Andrew Fleischman has pointed out, the moment this bill takes effect on Jan. 1, 2020, the state will be illegally holding thousands of citizens in jail without bond. That’s because, under HB 481, pregnant inmates’ fetuses have independent rights — including the right to due process.

It’s hardly shocking that an anti-abortion measure was pushed through without bothering to think about its untended effects. While the bill includes an exception to save a woman’s life, rape and incest exemptions would only apply if a police report was filed first, forcing some women to go through even more trauma.

The ACLU has already promised to sue over the measure:

Andrea Young, the executive director of the ACLU of Georgia, told CNN the organization is in the process of preparing a court challenge to the bill. She said the ACLU believes it’s a clear violation of Roe v. Wade.

“Today’s women can only thrive in a state that protects their most basic rights — the right to choose when and whether to start a family. Georgia can’t afford to go backward on women’s health and rights,” Young said in a written statement Tuesday. “We will act to block this assault on women’s health, rights and self-determination.”

Staci Fox, CEO of Planned Parenthood Southeast, said she had a few messages.

To Georgia’s governor, she said, “We will see you in court.”

To the lawmakers who supported the bill, she said, “We are coming for their seats.”

As far as the lawsuit goes, no doubt Republicans expect it — and welcome it. That’s kind of the point. Republicans want this bill to get in front of the conservative Supreme Court so that abortion rights can be more permanently curtailed. If this bill doesn’t do it, a similar one just might. And if some women suffer along the way, so be it. Their lives aren’t the ones “pro-life” advocates care about. 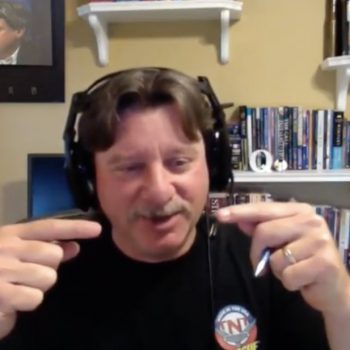 May 7, 2019
Christian “Prophet”: Satan's Chemtrails Are Blocking Us from "God’s Frequency"
Next Post