Kids in Philly Islamic Center Video Say “We Will Chop Off Their Heads” for Allah May 6, 2019 Hemant Mehta

A video from the Muslim American Society Islamic Center in Philadelphia, taken in mid-April, shows a bunch of kids reciting poems and singing songs… which is perfectly normal for any religious center. Except that the script here calls for the celebration of those who “crush the treacherous ones” before saying of their enemies, “We will chop off their heads” and “subject them to eternal torture.”

In the video, children are seeing singing: “Glorious steeds call us and lead us [to] the Al-Aqsa Mosque. The blood of martyrs protects us… Take us, oh ships… until we reach our shores and crush the treacherous ones… Flow, oh rivers of martyrs!”

A young girl reads: “We will defend [Palestine] with our bodies… We will chop off their heads, and we will liberate the sorrowful and exalted Al-Aqsa Mosque… We will subject them to eternal torture.”

The irony is that the Muslim American Society says on their website that they’ve been lauded for work on “programs dealing with youth on the key issues of extremism, violence, hate and intolerance.” These particular bits of material? They just didn’t get properly vetted.

The Muslim American Society — Philadelphia Center rejects a statement made at an event held in April at a local community center in Philadelphia. The center celebrated “Ummah Day” where children sang songs from their cultural traditions. While we celebrate the coming together of different cultures and languages, not all songs were properly vetted. This was an unintended mistake and an oversight in which the center and the students are remorseful. MAS-Philadelphia Center will conduct an internal investigation to ensure this does not occur again.

As a faith-based organization dedicated to moving people to strive for God-consciousness and a just and virtuous society, we affirm our long-standing position on our shared values of humanity. We stand resolutely in our condemnation of hate, bigotry, Islamophobia, xenophobia, racism, antisemitism and all the illnesses of hate that plague our society.

That’s all well and good… but how many people failed to catch obviously violent rhetoric because they just saw it as cultural material and gave it a pass?

I don’t take the extremist view that this mosque was somehow purposely encouraging these kids to be violent. But when your
“cultural” songs include violence, then at least acknowledge the problem with the culture. The center’s apology note doesn’t mention that. They simply say it’s a mistake that the song was included in the celebration — not that it’s appalling such a song would ever be written, much less celebrated.

For what it’s worth, a more recent statement from MAS takes a more hard-line approach about the issue. They now say, after investigation, that the group in the video wasn’t even the local MAS chapter, but rather a separate school that rents space at their Philadelphia center. The person in charge of that program has been fired.

The school board has informed us that it has taken immediate actions and dismissed the person in charge of the program. In addition, they will form a local commission to aid in sensitivity training and proper supervision for future programs.

Unfortunately, the video from the school was uploaded to the chapter’s Facebook page without verifying the content of the video for appropriateness and making sure it conforms to our hate-free policy and values. The chapter will take further steps in assuring strict adherence to publishing and posting policies.

There’s still no explanation of why that song would ever be sung at all. But their point is that this wasn’t some event they personally sanctioned. They wouldn’t have allowed it if the proper procedures were in place. It was a mistake and MAS is taking action on their end. That’s the right move, though they can go much further with their explanations. To suggest that this is somehow indicative of what all Muslims believe or condone reveals incredible ignorance about the beliefs of American Muslims.

For what it’s worth, since some people will eagerly argue that this group of Muslims hates other religions, MAS released statements of sympathy and solidarity after the shootings at a San Diego synagogue and Christian churches in Sri Lanka. 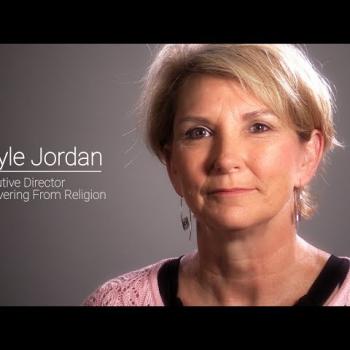 May 5, 2019
Before She Was an Atheist Activist, Gayle Jordan Escaped Fundamentalist Faith
Next Post