At Prayer Dinner, Trump Brags About His Right-Wing Judges to Evangelical Crowd May 2, 2019 Hemant Mehta

At Prayer Dinner, Trump Brags About His Right-Wing Judges to Evangelical Crowd

During his speech last night at the National Day of Prayer dinner, Donald Trump told a mostly conservative Christian audience that they should be thrilled about how Republicans have pushed through a near-record number of federal judges with lifetime appointments to the bench, implying that those judges would be making decisions in the audience’s favor.

It went over well, which you’d expect for an event organized by a group of right-wing evangelicals.

I’m thrilled to report that, tomorrow, the Senate will confirm the 100th federal judge to the court system. Under my administration, we’re getting to a level where we’re gonna be breaking records with respect to the judiciary, which means a lot to the people in this room because you were treated very poorly. And now, with time, you’ll see what happens. And we’ll have close to 145 very shortly. 145 federal judges, including two great Supreme Court judges and justices of the Supreme Court. So I think it’s something that was long overdue and I think we’re gonna be treated very, very fairly. Very important.

During this holy season when Christians…

Why even bother with the façade of impartiality, right? I put in conservative judges who will support your causes no matter what the facts are. That’s what Trump was telling them. He said they would be “treated very, very fairly” as if he were winking right at them. And they loved it.

This is why white evangelical leaders and their followers voted for Trump — and why they all overlook the constant stream of incompetence and cruelty from his administration. As long as they get their judges, they don’t give a damn what happens to the rest of the country. If a bunch of brown families are torn apart at the border, who cares, as long as fetuses are prioritized over pregnant women. That’s what white evangelicals want.

And for the record, those Christians weren’t “treated poorly” by the courts. They were just defending bad ideas. It’s not poor treatment, for example, when marriage equality is legalized; it’s that the Supreme Court finally recognized faith-based bigotry isn’t a good enough reason to deprive a group of people from having equal rights. Evangelicals don’t win in fair legal fights; they have to break the system to push their faith on others.

Right now, they have an administration and GOP Senate majority that is happy to break it for them. Why not, right? It’s not like they have anything else of substance to offer the country. 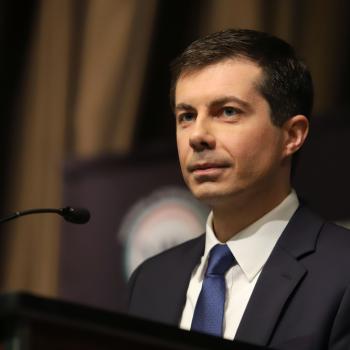 May 2, 2019
Pete Buttigieg Supports, Then Quickly Rejects, Religious Exemptions for Vaccines
Next Post