Pat Robertson: The Idea That Earth Is Only 6,000 Years Old “Does Not Compute”

Pat Robertson has done it: He said something sensible. It’s such a rare sight to behold that we should all stop to admire it.

It happened on today’s episode of The 700 Club in response to a woman named Sheila who said she learned in church that Creation occurred 6,000 years ago, but that didn’t make sense “compared to science saying dinosaurs are thousands or millions of years old.” (Millions, Sheila. It’s millions.)

She asked Robertson how she could reconcile the two, and he responded that she just needed to get over all that 6,000-year-old garbage.

One of the reasons that I have added a course is what is called “Cosmology” to the curriculum at Regent School of Divinity is that I wanted to counter this business… there was a Bishop Ussher who added up all the years the Bible speaks about between Adam and Eve and us, and he added up 6,000 years.

Well, the truth is that, you know, the dinosaurs were extinct maybe 200, or 100, or 50 — excuse me, I’ll get it right — about 50 billion years ago. [Note: It’s 65 million years.] And this planet has gone much longer than that. There’s a course that they were trying to hustle around called “Creation Science.” It was just nonsense. And it was so embarrassing. So we wanted to make sure we told the truth.

You know, this universe that we live in is… 14 billion years old. And there’s no question about it. And we have tremendous geological records and all the rest of it. And that 6,000-year stuff just doesn’t compute.

But we as Christians need to know the truth… There are about a billion trillion stars outside of our Sun in the universe. It’s huge! So let’s give God credit for what He did and not try to limit him to 6,000 years.

For all his flaws — and there are many — Robertson has always been a critic of Young Earth Creationism. He has said for years that Creationists make no sense, that their belief in a young Earth “wasn’t inspired by the Lord,” and that “you have to be deaf, dumb, and blind to think that this Earth that we live in only has 6,000 years of existence.”

Creationist Ken Ham hasn’t handled it well, saying of Robertson, “We don’t need enemies from without the church when we have such destructive teaching within the church.” (I assume that whenever Robertson speaks out against Young Earth Creationism, Ham’s Ark sinks another inch.)

It’s even more entertaining when one of the sides just happens to fall in line with reality. Enjoy it while you can. It won’t last.

April 30, 2019
Christian Mom: Wives Who Refuse Sex Should Get Over It Since It Won't Take Long
Next Post 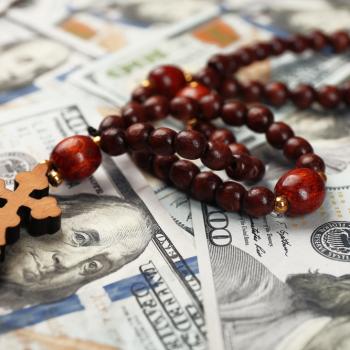