Some Guy Desperate for Cash Says He Found the “Praying Hands of Jesus” in Rocks April 28, 2019 Hemant Mehta

Back in October, a Newfoundland man named Barry Gillingham made a startling discovery: He found Jesus while doing his work as an engineering inspector.

I’m just kidding. He didn’t find Jesus. He found a rock that was broken in two parts right where there was a splash of whiteness. Now he’s passing those white streaks off as “praying hands” and desperately trying to make some money off of it.

An excavator was digging away at a roadside when the rock fell down in front of him.

“When it split, I seen this quartz-like structure in each of the two halves that was there,” Gillingham said.

“Those rocks, when they’re opened up, you can clearly see the resemblance of two hands, like praying hands,” Gillingham said. “It’s very symbolic, I must say.”

That said, he says he already has offers in the “lower five digit” range for the pair.

Despite the handsome offers he says are already coming in, Gillingham says he will sit tight for now.

“There’s only one like it in the world. I mean, if this was a painting that was found by Michelangelo that was painted 300 years ago on a piece of canvas, it would probably be worth millions.”

Right. The old “I totally have a girlfriend, but she goes to another school” trick. He says he has multiple offers of at least $10,000… but he’s holding out for something more. I’d still love to know who’s dumb enough to throw $10,000 at something that probably exists many times over at that excavation site.

If those are the praying hands of Jesus, though, where the hell is the rest of His body?! Someone go back to those rocks and dig!

April 28, 2019
Satanists Sue MN Town That Changed Its Rules to Avoid a Non-Christian Display
Next Post 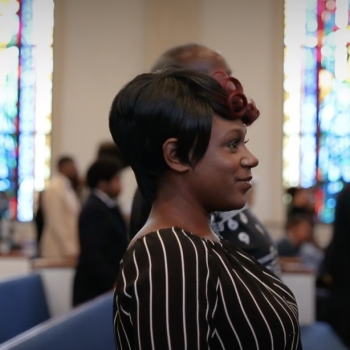 April 28, 2019 The Religious Hypocrisy in This Decades-Old Adoption Controversy is Appalling
Browse Our Archives
What Are Your Thoughts?leave a comment