Franklin Graham: The Boy Scout Abuse Scandal Is Bad (And So Are Gay Leaders)

The New York Times revealed this week that the Boy Scouts have secret records that reveal allegations of sexual abuse involving more than 12,000 children and implicating nearly 8,000 volunteer “perpetrators.” The records span 72 years, from 1944 to 2016.

We don’t know how many of these allegations were substantiated or how the Scouts dealt with them. They said in a statement that law enforcement officials were made aware of “every account of suspected abuse,” but you have to take their word for it.

“We care deeply about all victims of child abuse and sincerely apologize to anyone who was harmed during their time in scouting,” the Boy Scouts said in a statement. “Nothing is more important than the safety and protection of children in scouting, and we are outraged that there have been times when individuals took advantage of our programs to abuse innocent children.”

“At no time have we ever knowingly allowed a perpetrator to work with youth,” the statement said.

It’s horrific to contemplate, and it’s another reminder of how groups have to be extra vigilant when running any organization that involves access to children.

It’s also ironic that the Boy Scouts have always banned open atheists from their organization on the grounds that Scout Law requires members to be “reverent” while the Scout Oath includes the line, “I will do my best to do my duty to God.” Atheists weren’t allowed because obedience to God, the Scouts implied, was part of a moral upbringing. So much for that myth.

But leave it to evangelist Franklin Graham to take this story and use it to trash gay people.

… Our hearts go out to these victims and their families. Sexual abuse is so rampant in our world today. To make matters worse, in 2013 the Boy Scouts made a decision to allow gay members in the organization and, then in 2015, to allow gay leaders. Now, there are reports they are considering filing for bankruptcy, in an effort to limit their financial liability. I agree with the call that the list of perpetrators should be made public for the protection of others. The Boy Scouts should be accountable for what’s been called their “culture of shame and secrecy.”

“To make matters worse“? Worse than sexual abuse?! What the hell is he talking about? The sexual abuse is awful. The admission of gay scouts and gay scout leaders has absolutely nothing to do with that. At the very least, the revelation of the abuse files makes no mention that the decision to allow openly gay people in the organization contributed to the problem.

Gay leaders weren’t even permitted, as Graham admits, until 2015. The records of abuse only go through 2016. I assure you the abuse allegations didn’t spike in the final months because there were a handful of gay leaders.

Even if you give Graham the benefit of the doubt, which he never deserves, “to make matters worse” is a statement about the downfall of the organization. But even then, he’s saying the Scouts did something wrong by allowing gay people in the group.

Even in evangelical Christian circles, the general rule is that being gay is fine, but acting on it is not. Yet Graham, here, is saying that allowing gay people to merely exist in the group is still self-defeating. He can’t even keep his bigotry straight.

What a despicable, hateful bigot. No wonder more and more Americans want nothing to do with organized religion.

April 24, 2019
For Some Reason, an Ohio Middle School Displays a Plaque of the Ten Commandments
Next Post 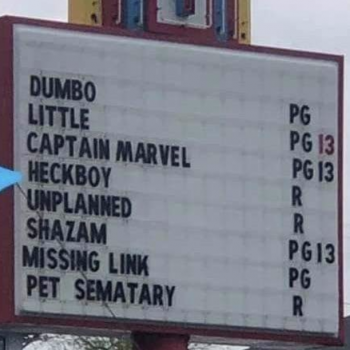 April 25, 2019 Bible Belt Movie Theater Censors Title of "Hellboy" on Marquee
Browse Our Archives
What Are Your Thoughts?leave a comment