Islamists Are Behind the Sri Lanka Easter Bombings, Investigators Say

When you hear the name Sri Lanka, you may think of the Tamil Tigers, a violent secessionist group that plunged the island into civil war for 26 years until it was defeated about ten years ago.

Initial speculation following the devastating bombings on Easter Sunday was that maybe the Tigers were back. But the savagery perpetrated against Christian worshipers and against guests of multiple luxury hotels, claiming at least 321 lives, was in fact carried out by Muslim terrorists, investigators say. (The Tamil Tigers, by contrast, were not an overtly religious groups, and drew recruits from several faiths).

The government on Monday blamed a little-known radical Islamist group for the devastating Easter Sunday suicide bombings that killed more than 300 people. Officials said the group, which had not carried out any serious attacks before, had received help from an international terrorist organization.

I watched Hotel Mumbai just last week, a spellbinding and upsetting new movie that replays the events of November 2008 in India’s biggest city, when 10 Lashkar-e-Taiba gunmen launched a ferocious attack on Mumbai’s train station and then on a spate of luxury hotels. They killed 165 people and wounded more than 300. The scale and the multiple locations of the well-coordinated Sri Lanka attacks reminded me of that horrible bloodbath.

There’s a scene in Hotel Mumbai in which a wounded terrorist, just hours from death, calls his father and sister to convey his love for them, tears streaming down his cheeks. It never seems to dawn on him that the victims he killed also had relatives they loved deeply, and vice versa. Religion can do that to otherwise normal human beings. (Sad to say that no religion currently does it as well, recruiting impressive numbers of wannabe terrorists and those who wish them well, as Islam — even though the vast majority of Muslims are of course peaceful).

Incidentally, Sri Lanka security forces had advance warning — as early as April 4 — that terrorist acts were being planned, but were apparently powerless to stop them.

On Monday the Sri Lankan government admitted that it failed to act on multiple warnings before a coordinated series of attacks ripped through churches and hotels on Easter Sunday.

Suspicion has fallen on National Tawheed Jamath, a local group of Islamists, but the organization has been so low-key that it doesn’t even merit a Wikipedia page. Government officials believe there is “a wider international network” behind the bombings.

The United States believes it has identified a key terrorist operative in the attacks, and has initially concluded that the person has connections to international terrorism organizations, including ISIS.

Only 9 to 10 percent of Sri Lankans are (mainly Sunni) Muslims. Seventy percent are Buddhists; about seven percent are (predominantly Catholic) Christians; and roughly 13 percent are Hindus.

Muslims have occasionally been on the receiving end of Sri Lankan violence and displacement.

In 1990, over 16,000 Muslim families were evicted from their ancestral homes by the Tamil Tigers. They were branded as collaborators and kicked out of rebel-controlled areas.

Just eighteen months ago, there were violent street clashes between Buddhists and Muslims in the south of Sri Lanka, although the island’s religious groups generally tolerate each other, and faith-based violence is hardly endemic.

Sri Lanka is among the most religious nations on the planet, with 99 percent of the population saying that religion is an important element of their daily lives.

P.S.: Whatever’s left of ISIS has just claimed responsibility for the Sri Lanka bombings. Caveat: That doesn’t mean its involvement is established fact; the group would gladly claim responsibility for explosive diarrhea if that would keep its name in the headlines.

The Islamic State claimed responsibility on Tuesday for the Easter Sunday bombings at churches and hotels in Sri Lanka, as the government there raised the number of people killed to 321. The group’s Amaq news agency called the bombers “Islamic State fighters.” 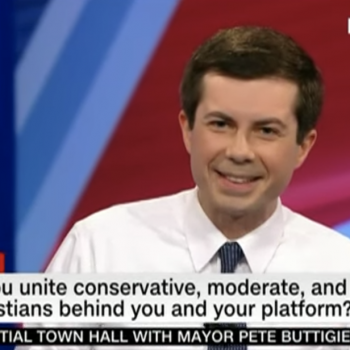 April 23, 2019
Pete Buttigieg: "I Believe Strongly in the Separation of Church and State"
Next Post