Pastor Robert Jeffress: An Atheist Invocation is Like “a Diet Cheeseburger”

In case you missed the news, an appellate court ruled yesterday that it was perfectly legal for the U.S. House to require invocations to be religious in nature. Atheist Dan Barker had sued after getting a rejection, despite meeting the House’s other requirements to deliver an opening “prayer.”

It’s not weird that Dobbs and Jeffress celebrated the ruling. But their discussion about it had little to do with substance (shocking!) and turned into an atheist-bashing session.

Jeffress rejected the idea that atheists could even give an invocation:

… I have prayed, myself, in the House. Father [Patrick] Conroy invited me to come, along with [Rep.] Louie Gohmert, to come and pray one time, and when I prayed, I prayed to the God of the Bible, through His Son Jesus Christ. I believe he’s the true God. I believe other faiths ought to be able to pray as well in the House chambers.

But what is not right is to have an atheist offer a “secular prayer.” A “secular prayer” is an oxymoron, kind of like a diet cheeseburger. They don’t exist. The Court was right in saying you have to have a divine being to pray to.

That is utter bullshit. Atheists have been delivering invocations at city councils and state legislatures for years now, especially after the Greece v. Galloway Supreme Court decision said sectarian invocations were legal.

Remember: Invocations are about inspiring the legislators, not proselytizing on government time. If you want to inspire using religious language, that’s (unfortunately) permitted. But there’s absolutely no reason atheists can’t do the same thing. There’s no shortage of transcripts of secular invocations — here’s a bunch just from Florida — that are meant to uplift everybody in the room instead of just the people who share your views on religion.

(By the way, diet cheeseburgers exist.)

… look, this Freedom from Religion Foundation that’s bringing this, this is a left-wing radical godless organization that’s trying to force this. Their specialty, Lou, is suing… towns and school districts for mentioning God in a prayer or singing about God in a Christmas carol. They are low life.

This is also utter bullshit. Not surprising. It’s what Jeffress offers his church on Sunday mornings. It’s also a reminder that for all that Jeffress talks about Christ, he hasn’t learned a thing from Him. (In what Bible verse does Jesus call his opponents “low life”?)

FFRF doesn’t sue people for mentioning God. They take action if government or school officials are trying to use their positions to promote religion. FFRF fights for neutrality, not government advocacy of atheism.

It’s telling that Dobbs invited Jeffress, but no atheists, to talk about the lawsuit and a separate survey noting the decline in church attendance. They’re not interested in a conversation. They’re only interested in using the airwaves to spread Christian propaganda.

But the worst part of the exchange came after all that. The two men argued that atheists were trying to destroy faith… even though Barker’s lawsuit was all about having the same opportunity as religious invocation speakers. He wasn’t trying to destroy the practice; he wanted to take part in it!

Jeffress didn’t correct Dobbs on this. Instead, he insisted that atheists were just lying about their atheism.

DOBBS: Why are atheists so intent on destroying any reference or practice of faith if they don’t believe in God? Why isn’t that in itself sufficient for them?

JEFFRESS: Well, you know, I think, deep down, they do believe in God. You know, the Bible says in the Psalms, the Fool — literally, the moron — has said in his heart there is no God. You have to be a moron to look around and say all of this happened by chance, but they don’t want to acknowledge God, Lou, because if they do, they know that means they have to submit their lives to Him, and they’re unwilling to do that.

DOBBS: But then they go beyond that and want to destroy other’s faith and to eliminate their right to practice their faith.

JEFFRESS: That’s right. And the reason is: Anytime they hear God from me or from you, they’re convicted in their heart about it, and they hate that conviction. They think they can silence the mention of God. But every time you look into the sky and see the Sun, that’s a reminder that there is a God.

Dobbs asked why simply being an atheist wasn’t good enough, not realizing that people like Jeffress coming on his show night after night, telling lies, and using their pulpit to advocate for harmful public policies is precisely why many atheists are so vocal about it.

Just to state the obvious, many atheists would love to see religion and religious ideas fade away, but no organized atheist group (and certainly not Dan Barker) is trying to eliminate anyone’s right to believe what they want. FFRF wants everyone to have that right. That means making sure government officials aren’t promoting one belief over another. 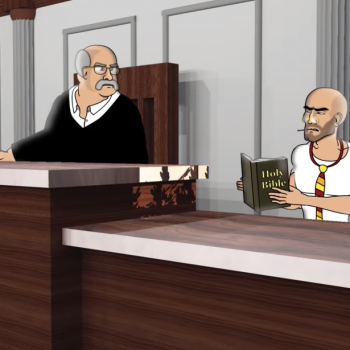 April 19, 2019
Even Poisoning Your Own Child Can Be Justified With the Right Bible Verses
Next Post 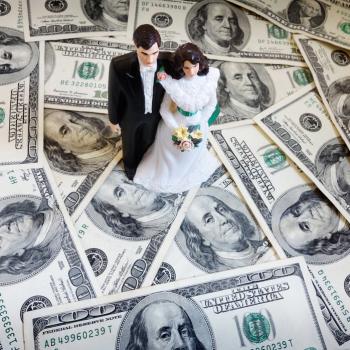