***Update***: The district now says everyone is misinterpreting the situation and that rainbow clothing and LGBTQ paraphernalia are NOT banned.

… [They] read “it’s great to be straight it’s not OK to be gay,” “black lives only matter because if it weren’t for them who would pick our cotton,” and “Join the KKK,” with “the confederate kid club” in parentheses beneath it.

Horrible. One student who may have been the culprit was found and disciplined for it, so there’s that. The problem didn’t stop there, though, because just this week, there were students caught waving Confederate flags at school. (Because when you think Confederacy, you think Wyoming.) Some students responded to that symbol of hate by waving rainbow flags right back.

Now the school is trying to put a stop to all this in the worst way possible.

On Wednesday, about two dozen students were called out of class to meet with three faculty members. All the students were members of the school’s Gay Straight Alliance, and the teachers had a message for them: 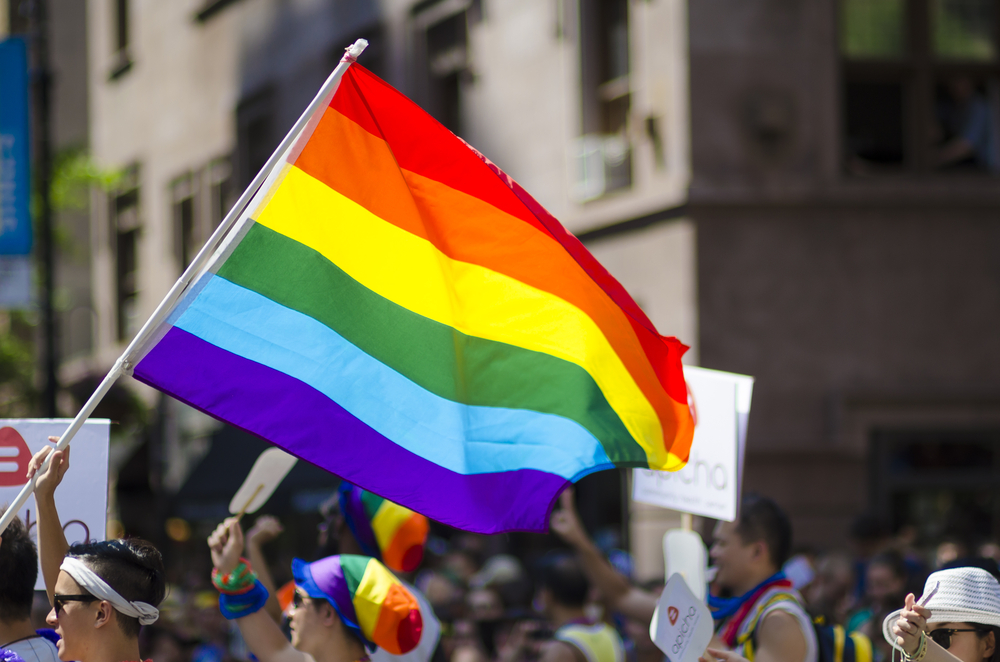 … they were no longer allowed to have or wear any LGBTQ paraphernalia on school grounds, including flags, shirts, pins and bracelets.

Students were told they would not even be allowed to wear rainbow colors to school, according to a student and several parents.

Why would those students, who did nothing wrong, be told they couldn’t wear LGBTQ “paraphernalia” or rainbow colors to school? Because it would be insulting to the school’s bigots.

“They told us it was a school distraction and ‘You don’t want to make other people feel like you felt when you saw the posters,’” [eighth grader Ashlynn Kercher] said.

Kercher said they were told if they violate this new rule, they will be written up for dress code violations, which can result in suspensions over time.

Think about that: Symbols of love and inclusion and acceptance are now forbidden because it would offend the school’s worst human beings. Think of the haters!

The policy makes absolutely no sense, and the school’s principal told a local paper that he has nothing to do with any of this:

McCormick principal Jeff Conine told the Wyoming Tribune Eagle that he was unaware this meeting had happened and he had not made any decision to ban anything.

“It didn’t come from this administration,” Conine said.

That’s even weirder. Three teachers created a new dress code policy targeting the GSA, pulled club members out of class to tell them about it, and the principal was unaware that any of this was happening? What does that say about his abilities to oversee what’s happening at the school?

It’s also troubling because Conine recently told the GSA’s sponsor, substitute teacher and parent Kaycee Cook, that she wasn’t welcome back at the school. She was given no reason for her dismissal. But Superintendent Boyd Brown later said she would be reinstated. That hasn’t happened yet.

It’s all a giant mess. No one in the administration seems to know what they’re doing, and the people making decisions are making all the wrong ones. The only people who seem to have their heads on straight are the members of the GSA, and they’re the ones getting threatened with punishment.

If Conine doesn’t know what the hell is going on, then he should be able to rescind the anti-rainbow policy. He hasn’t done that yet. I wonder why. The entire story creates far more questions than it resolves.

(Image via Shutterstock. Thanks to Wanda for the link)

April 19, 2019 Christian Bigot: If Pete Buttigieg Gets Elected, People Like Me "Will Be Hated"
Browse Our Archives
What Are Your Thoughts?leave a comment