Students Physically Abuse Pastor, At His Request, As Part of Weird Jesus Lesson

A pastor at a church in Ohio decided to let kids physically abuse him — including cutting him with a knife — in order to teach them a lesson about Jesus.

Video of the kids spitting on him, slapping him, and (yes) cutting his back with a steak knife soon made its way to social media.

Now parents are vowing never to step foot inside again, and the church is trying to defend whatever the hell you want to call that “sermon.”

The incident took place Monday after school at Impact City Church in Pataskala, Ohio. The church is right across the street from a local high school and middle school, and students often go to the church as a place to hang out until their parents pick them up. It’s an easy way to proselytize to a captive audience. Yesterday, associate pastor Jaddeus Dempsey used the opportunity to teach kids about Jesus and the crucifixion in the worst possible way.

The disturbing video is here. Consider yourself warned.

Needless to say, despite the laughter of some of the kids, an adult getting physically abused — even at his own request — creates a disturbing mental image for kids that won’t go away anytime soon.

The mother of a youth, who reportedly employed a knife handed him by Dempsey to cut the associate pastor at his invitation, said she was alerted to the video by a friend, she told Advocate news partner 10TV in an on-camera interview. She went to the church with her husband to get their son.

The mother of that youth, identified only as “Mandy” by 10TV, said she and her husband would not be sending their son back to the church.

The parents of the boy who used the knife told 10TV they are seeking a personal apology, “Not one posted to Facebook.” They also told 10TV they had contacted the Licking County Sheriff’s Office regarding the incident.

They’re referring to the video “apology” posted by the church’s lead pastor, Justin Ross (on the right):

After admitting Dempsey’s actions were inappropriate, Ross goes on to say they did it because something something who-the-hell-cares something something Jesus. And all of you totally would’ve heard that if the camera kept rolling!… as if the biggest problem with the recording was that it didn’t go on long enough.

But Ross then goes on to describe what wasn’t posted to social media.

He said Dempsey then sat down with students, and explained to them “about this guy named Jesus, who thousands of years ago, he was put on trial for a crime he didn’t commit. And he was beaten. He was broken. He was whipped. He was crucified, and he died as an innocent man… He chose to allow it to happen…”

He said Dempsey’s illustration was meant to share that message of love. Ross said while Dempsey’s “intent was honorable, it wasn’t appropriate for our student gathering today.”

The intent wasn’t “honorable.” It was idiotic. It was traumatizing. It’s one man’s fantasy re-enactment of The Passion of the Christ, with the key difference being Jesus didn’t ask people to torture Him.

What Dempsey did was a perfect representation of modern Christian persecution: It’s not real. It’s self-generated. And even then, Christians pretend to be the victims even though they’re actually the ones inflicting harm on others.

For now, Dempsey still has a job. So does Ross. And the church hasn’t offered one cent in therapy costs for any affected children. 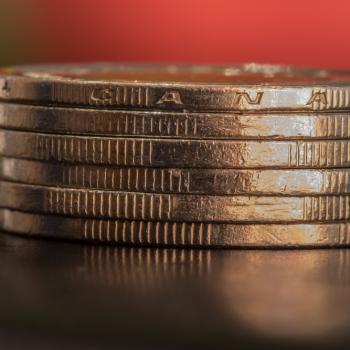