For years now, current and former students at Brigham Young University have noted the problems with the school’s honor code.

All students are required to sign the “Honor Code,” which requires them to live by Mormon standards. They must reject alcohol, coffee, tobacco, pre-marital sex, “homosexual behavior,” and more. The problems occur when students are punished in selective or arbitrary ways. Specifically, students who are sexually assaulted were afraid of informing school officials out of fear that they would be punished for violating the code and immediately expelled. (The school eventually said they wouldn’t do that.)

The problems haven’t been resolved, though. Yesterday, there was a demonstration on campus calling for more drastic changes to the system to make sure students aren’t severely punished for things that don’t warrant it. In other words, they don’t want an honor code that’s written in black and white. They don’t think students should be kicked out of school for doing things that young people just do.

On Instagram, students and graduates have shared stories of being suspended or expelled for violations such as kissing a date good night or wearing a two-piece swimsuit.

One young man, according to his sibling, killed himself less than two months after he was expelled on grounds that he had engaged in sexual acts with a former girlfriend. Another student said she overdosed on pills after she was punished for revealing she had been sexually assaulted. A gay student said he was asked explicit questions about his sexuality and sentenced to nine months probation after he spent the night at a woman’s apartment.

Keep in mind these are students who respect the Mormon Church. They belong to it. They support the rules. But treating students like they committed an unforgivable sin for what could just as easily be a teachable moment is what they want the school to fix. What happened to forgiveness?

The group wants more transparency and protections for students, and it has proposed a number of specific changes to ensure that the accused are treated fairly. Among their demands, the students want to bar the reporting of trivial offenses, like cursing or watching R-rated movies, a practice that some said fosters a culture of spite.

Other proposals include the creation of a student advocacy group that could provide information about Honor Code Office proceedings, allowing accused students to bring in a trusted third party, and changing the code’s prohibition of “homosexual behavior” to “homosexual activity,” so gay students are not penalized simply for their sexuality.

The entire demonstration is about asking BYU to use common sense and empathy. The students should have to ask for this. The adults should be offering it by default. Yet because religion is involved, as is so often the case, there seems to be no room for leniency. 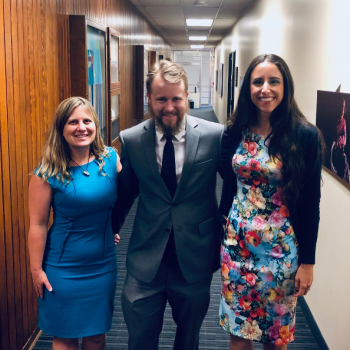 April 12, 2019
After Arizona's Secular Invocation Battles, I'm in This Fight for the Long Haul
Next Post