The Weatherford Independent School District in Texas begins all of its Board of Trustees meetings with a Christian prayer. The members of the Board deliver them, with several mentions of “Jesus Christ,” before closing them with “Amen.” If you think that’s illegal… well, yes, you’re right. Especially since this is a school board as opposed to a city council.

Back in late February, a few citizens contact the Freedom From Religion Foundation about this, and attorney Sam Grover sent WISD Board of Trustees President Mike Guest a letter explaining the problem and calling for them to change their practices.

In its current form, the Board’s prayer practice needlessly exposes the school district to legal liability while also ostracizing members of your community… We ask that the Board of Trustees refrain from scheduling invocations as part of future meetings in order to respect the rights of conscience of those in the community who practice a minority religion or no religion at all. Please inform us in writing at your earliest convenience of the changes made to the Board’s practice.

When the school board met again earlier this week, there was a prayer service outside the building before the meeting began, shofar and all (which, I should say, isn’t helping the case that these are secular meetings):

In any case, it worked. During Monday’s meeting, Guest dismissed the letter entirely:

“Our prayers are for these students, staff, teachers and this community,” Guest said. “Whether you choose to participate in the prayer is your decision. This board has not made and will not ever make negative connotations about other religions or practices. We respect everyone’s right to their faith, religions and thoughts.”

Notice the wording there. Guest says they won’t say anything bad about “other” religions. But that suggests Christianity is the default religion of that school board! He’s basically saying there’s an official religion and screw you if you don’t like it.

While Guest insists that the Board’s practice is “in compliance with the law,” FFRF’s Sam Grover told me the legality of what they’re doing is very much up in the air.

FFRF recently won a lawsuit at the Ninth Circuit against Chino Valley School District over its school board prayer practice, which is very similar to Weatherford ISD’s practice. But while the Board’s prayer practice might be legal, it’s certainly not wise. Ostracizing minority religious and nonreligious students, parents, and community members undermines the very purpose of a school board. This prayer practice does a disservice to the entire community.

Whether FFRF will file a lawsuit over this is another question. This is Texas, where the courts aren’t friendly to supporters of church/state separation. Also, the plaintiff would need to be willing to put himself or herself in the public spotlight, and that’s a lot to ask of anyone in a religious community.

There’s a good chance the Christian prayers will continue here only because the number of obstacles that would have to be overcome to stop the practice are overwhelming.

That doesn’t mean what WISD is doing is okay. It’s sad that the Trustees, in their elected positions, care more about pleasing Jesus than doing what’s best for a diverse group of students. 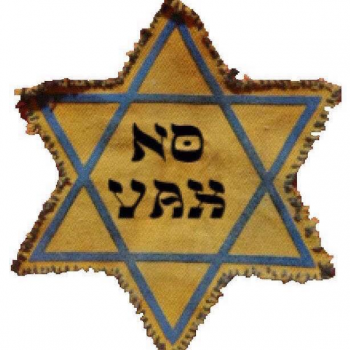 April 11, 2019 Anti-Vaxxers Are Using a Holocaust-Era Star of David as a Symbol of Persecution
Browse Our Archives
What Are Your Thoughts?leave a comment