Atheists Made a Joke about Ray Comfort’s Movies. He Says It’s Censorship.

A couple of days ago, American Atheists sent out a promotional email for their upcoming convention in Cincinnati, Ohio.

One of the evening sessions includes a comedy show featuring Eli Bosnick, Heath Enwright, and Noah Lugeons, a.k.a. the guys from God Awful Movies. They understand the only way to make films like God’s Not Dead better is by mocking them.

Here’s how AA described it in the email: 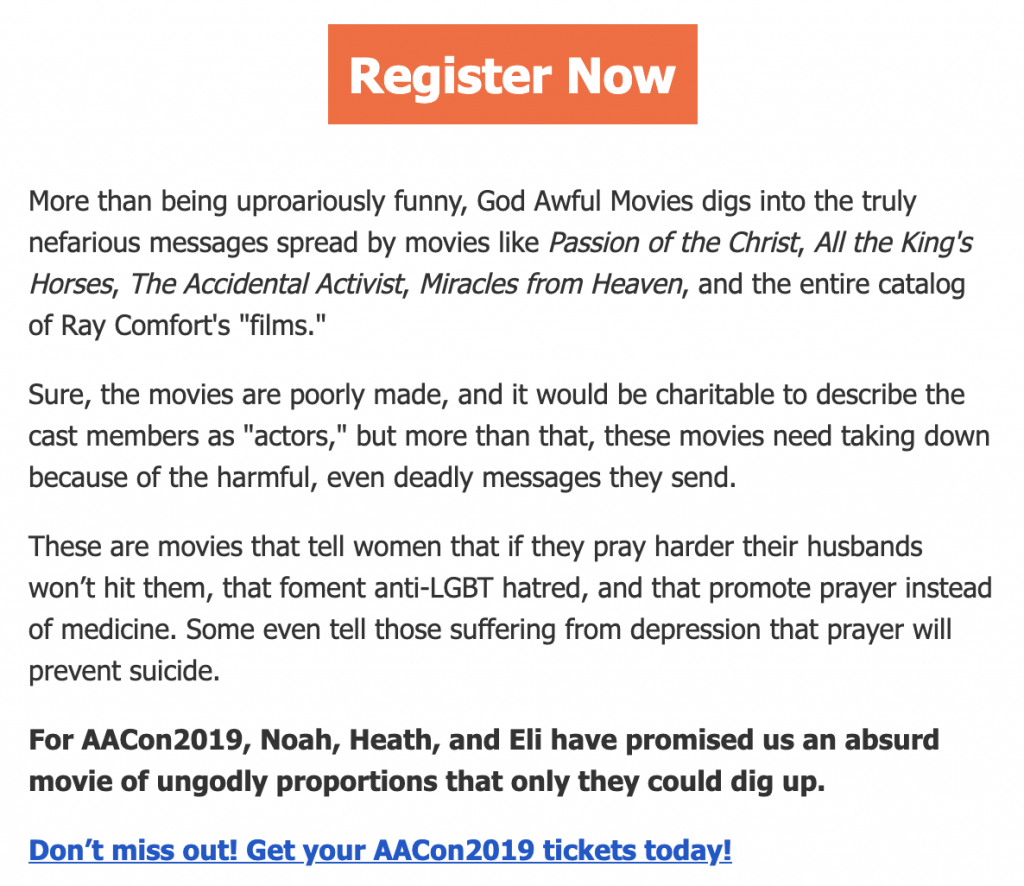 More than being uproariously funny, God Awful Movies digs into the truly nefarious messages spread by movies like Passion of the Christ, All the King’s Horses, The Accidental Activist, Miracles from Heaven, and the entire catalog of Ray Comfort’s “films.”

Sure, the movies are poorly made, and it would be charitable to describe the cast members as “actors,” but more than that, these movies need taking down because of the harmful, even deadly messages they send.

These are movies that tell women that if they pray harder their husbands won’t hit them, that foment anti-LGBT hatred, and that promote prayer instead of medicine. Some even tell those suffering from depression that prayer will prevent suicide.

Two things about what you just read:

1) The mention of Ray Comfort is a joke because he’s made a lot of cringe-worthy “movies.”

2) When they say “these movies need taking down,” they’re referring to the God Awful Movies guys mocking them.

You knew all that because you know how to read.

Now check out how Ray Comfort responded to that email — in a video specifically for atheists — as he promotes a screening of his own movie at nearby Ark Encounter that same weekend:

If you belong to American Atheists, you would’ve received a newsletter this week from your leaders warning you about our movies.

They don’t think you’re intellectually mature enough to handle seeing any of them.

In fact, they’re calling for a censorship of the “entire catalog of Ray Comfort’s ‘films.'” They said these movies need “taking down because of the harmful, even deadly messages they send”…

Somehow, a joke about the awfulness of Comfort’s movies is interpreted as an act of “censorship.”

This is what happens when you’re trained to see Christian Persecution everywhere. The irony is that atheists want you to see those movies because nothing will drive you further away from Christianity than realizing these are the best movies God’s followers have ever created. Once you realize how one-dimensional, predictable, and disturbing the movies are, you’ll be asking yourself how anyone could have fallen for this nonsense.

That said, if you bring your AA convention badge to Ark Encounter that weekend and tell Ray you’re an atheist, he’ll give you a signed book and a free banana split. Because bananas.

Nice offer. Still not worth it.

April 5, 2019 Atheists Say MS Must Offer Free Alternatives to "In God We Trust" License Plates
Browse Our Archives
What Are Your Thoughts?leave a comment