Pastor John Gray, a disciple of prosperity gospel preacher Joel Osteen, loves to brag about money. Late last year, he announced that he had given his wife a $200,000 Lamborghini. He also lives in a $1.8 million home (funded by Relentless Church).

Those things, in and of themselves, aren’t sins. What’s troubling is that Gray asked the members of his South Carolina church to pitch in $250,000 to help fix the building’s roof. (It would be easier, he said, if 2,500 people just gave $100 each.)

These stories have routinely been reported on by the Greenville News, a local paper that has good reason for covering a major megachurch, especially when the pastor is a nationally known TV personality who loves attention. Those stories are as objective as any you’ll find in a newspaper, but because Gray tends to get attention for all the wrong reasons, it’s easy for him to think the media is out to get him.

That’s why it was even more troubling when a guest pastor at his church made violent threats against the newspaper during a recent sermon.

Hope Carpenter and her husband used to run that very church before moving to San Jose last year, but her homecoming took a nasty turn very fast:

In her return, Carpenter delivered a fervent lecture on the importance of “holding fast” to confessions of faith, a message she claimed to have received from God that morning. She appeared fatigued by the end of her soliloquy, using its closing moments to express gratitude toward the church’s new, controversial leaders — pastors John and Aventer Gray — who stood directly behind her.

“I cut people. I got a knife right in that pocketbook,” Carpenter said, gesturing toward her seat. “Greenville News, come on. We done went through this. I’m still here, and guess who else is still going to be here?” She pointed to John Gray, who nodded in agreement.

Carpenter must have been paraphrasing the Bible verse when Jesus said, “If your enemy strikes you, pull out your sharpest weapon.”

It’s not just that she ignored the idea of turning the other cheek, she lashed out at the newspaper for publishing facts about Gray’s actions. It’s not like they made up the Lamborghini story. And when the church does something decent, they cover that as well.

Church officials dismissed the threat, saying it wasn’t something they approved and that they think she “was joking.” (A hilarious joke, that one.)

(Update from Hemant: The church’s PR firm sent along the full statement: “Pastors John and Aventer did not know what pastor Hope would say. She was given the microphone out of honor. Neither our pastors or anyone in our leadership would agree with any type of communication that would encourage or incite violence against another individual or entity. While we believe Pastor Hope was joking, we completely understand how her comments could be received in today’s climate. There is no place in our society for words that could fan the flames of discord.”

Notice that they never say Carpenter won’t be invited back. They also dismiss the seriousness of her comments, writing them off as a joke, and blaming other people for just taking it the wrong way. But they would like you to give them credit for denouncing violence in general. So golf claps all around.)

It’s ironic that Gray flaunts his wealth on social media but gets upset when the news media reports on it. If he wants better press, he should do better things. That should be hard for someone who calls himself a follower of Jesus — the same man who urged rich people to sell their possessions to the poor, not to drive a car that costs four times more than the average American salary.

In the meantime, maybe Carpenter should take her own advice:

If you fight every battle that comes your way, you will constantly be drained! Pick your battles with wisdom. Not everything is worth your energy 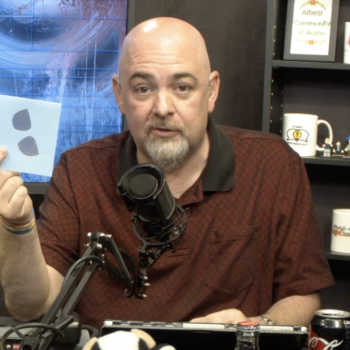 April 2, 2019
What Do You Do When Your Loved Ones Refuse to Accept Your Atheism?
Next Post