Pope Francis has been harshly criticized for pushing aside followers who wanted to kiss his ring — a moment that’s memorialized in a video that’s gone viral — but his spokesman said he was only concerned about germs.

The whole thing it reminiscent of the priest who, a few years ago, pulled his hand away from everyone who wanted to kiss it.

To outsiders, it just looks funny. The pope was perfectly cordial… except for the fact that the repeatedly didn’t want anyone’s mouth near his body.

Still, others were outraged. One Catholic columnist, for instance, said Francis was embarrassing his followers “in the name of humility.” Fox News contributor Raymond Arroyo said it “looks rude” and “makes people feel bad.” And the conservative LifeSite called it “disturbing.”

After all the attacks based on speculation, Francis attempted to clear the air. He explained that he allows small crowds to kiss the ring, something that is evidenced by the fact that he allowed adherents to do so earlier that day, but that he doesn’t do that for larger crowds for “hygiene” purposes.

Conservative critics rounded on the pontiff, accusing him of shunning the centuries-old tradition.

“It was a simple question of hygiene,” Mr Gisotti explained on Thursday, telling reporters that he had asked Pope Francis about it.

Mr Gisotti said that with so many people queuing up to see the pontiff in St Peter’s Square, he was mindful of the risk of spreading germs.

That makes a lot of sense. It’s the reason politicians on the campaign trail are rarely far away from a bottle of Purell. If Francis did it for “humility,” as critics allege, then he wouldn’t have allowed anyone to kiss the ring. That’s not the case at all. Beyond tradition, though, the whole incident is a reminder that consent matters, even in situations like this. The pope should be able to control who kisses him no matter what the tradition is.

There are far more egregious issues for the pope to worry about anyway, like when he admitted last month that priests are sexually abusing nuns and even holding them in sexual slavery. That’s worth all the criticism. The kissing thing is a distraction. 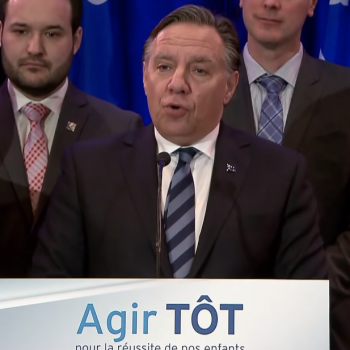 March 29, 2019
Quebec is on the Verge of Banning All Religious Symbols for Public Officials
Next Post

March 29, 2019 Christian Radio Host E.W. Jackson: LGBTQ Activists Are "Servants of Satan"
Browse Our Archives
What Are Your Thoughts?leave a comment