Tennessee is considering a bill that would make it legal to gamble on posts online. There’s a lot of money to be made for the state when it comes to legalized, regulated sports gambling — just as there is with legalized, regulated marijuana as well as the lottery — so you can understand why legislators are debating the issue. There are legitimate criticisms to discuss, too, just as there anytime a government considers taxing a “vice.”

But one of the amendments that was suggested by a legislators has to be the most idiotic, faith-based things you can imagine, especially when it comes to a bill about online gambling.

State Rep. Jason Powell, a Democrat, suggested an amendment to the bill that would’ve prohibited any gambling in the state on holidays (including Easter, Thanksgiving, and Christmas) and Sundays between 3:00-10:00pm.

… This is to do everything we can to promote responsible gaming in the state. This is some of the same holidays that we have for liquor sales in the state of Tennessee. And I think this is a… important amendment. You know, Sundays is a time for tithes and offering; it doesn’t need to be a time for wagers and lines or bets, when people are sitting in church and, you know, I think that you can place these bets in times outside of these times I’m offering here with this amendment…

Powell wants to make sure we honor God properly. So let’s gamble… but not at 3:00pm on a Sunday, y’all, because God wouldn’t like that.

For those who don’t follow sportsball, some of the biggest professional games of the year are played on Thanksgiving and Christmas, and most football teams play on Sunday afternoons and evenings. The amendment would’ve gutted the gambling bill for the dumbest reasons. (Powell said people could wager outside of the prohibited times, but if you’re gambling on any of those games, odds are you’re going to place your bets right before they begin.)

The good news is that his amendment failed on a 10-9 vote. (Some of those 9 “yes” votes may still oppose the overall bill.)

The bad news, for the state at least, is that the bill appears to be stalled for a variety of other reasons and it doesn’t look like it’s going to pass. Which means that, for now, everyone gambling on Sundays and holidays will continue to do it illegally. 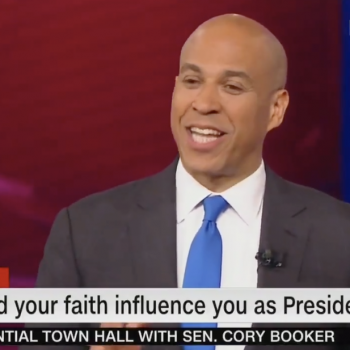 March 27, 2019
Cory Booker: "I Would Rather Hang Out With a Nice Atheist Than a Mean Christian"
Next Post