Cory Booker: “I Would Rather Hang Out With a Nice Atheist Than a Mean Christian” March 27, 2019 Hemant Mehta

Cory Booker: “I Would Rather Hang Out With a Nice Atheist Than a Mean Christian”

During a CNN Town Hall tonight, Democratic presidential candidate (and New Jersey senator) Cory Booker was asked how faith would influence him if he were in the White House.

That’s always a dangerous question, certainly among progressives. I don’t want faith influencing his policies, but obviously religious beliefs are going to influence their outlook. When similar questions were asked of Republican candidates before the 2016 election, we heard things like “We need to remind people that we do have a Judeo-Christian foundation.” Obviously, they talked about how they would block funding for Planned Parenthood and voiced their opposition to LGBTQ rights.

Booker, who is extremely devout in a very progressive way, has always been at ease talking about his faith, so this question should have been a pitch right down the middle for him.

He hit a grand slam.

Democratic presidential candidate Sen. Cory Booker (D-NJ): "I would rather hang out with a nice atheist than a mean Christian any day of the week." pic.twitter.com/uM9k8k5BJJ

So, I just want to say up front that I’m a person that often says that, “Before you tell me about your religion, show it to me in how you treat other people.” I was raised in a church where my mom taught Sunday school. I’ll never forget learning that verse, that faith without works is dead. And I’ll tell you what — I feel like I’m in church right now — and I’ll tell you what… I would rather hang out with a nice atheist than a mean Christian any day of the week.

It’s a powerful answer because it doesn’t alienate religious people while also putting all the weight on acts over words. The GOP loves to talk about how they’re the Party of Christ while supporting policies that specifically make life worse for poor people, minorities, and damn near everyone else who isn’t like them. Booker is more interested in acting the way Jesus would act than telling you why you should adopt his faith. I’ll take it.

All that said, there is a slight problem with his last line there because it suggests that “nice atheists” are a special breed, as if we’re not the people he regularly hangs out with anyway.

But it’s not like Booker meant it that way, so… not a big deal.

By the way, Booker and other candidates like Pete Buttigieg have been doing a really wonderful job in not letting Republicans pretend that they own religion. Both of those guys are Christians and they are making it clear in their campaigns that the right-wing evangelicals don’t speak for everyone who shares their faith. If Democrats want to win back the White House, they will need to do a better job of winning over religious voters without alienating their non-religious base. Booker and Buttigieg are showing how you get the best of both worlds.

March 27, 2019
Pete Buttigieg Shows the Hollow Theology of the Christian Right
Next Post 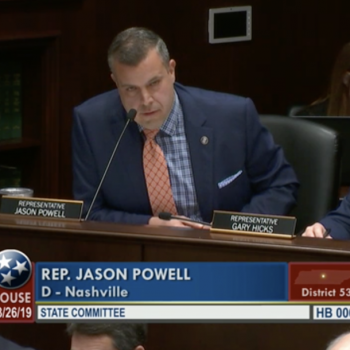