I know we like pointing out the bizarre Christian reactions when a natural disaster destroys a community but spares a Bible… as if that’s a sign of God’s love. But this is a new one.

The recent outbreak of tornadoes in Alabama decimated one family’s house. Everything, that is, except a closet where the grandmother used to pray.

Jason Smith, a member of the Billy Graham Rapid Response Team, shared the image on Facebook, where it quickly went viral.

Listen to me please. I just left a family who survived the tornado in this house and the only left standing is this closet. It’s the grandmother’s prayer closet, and the whole family survived. Are you kiddin me!!! My God is awesome!!! Shout somebody! –Jason–

If that’s the case, then that same “awesome” God has also killed 23 people and injured 97 others. God also destroyed their home.

But the closet is still there… so yay?

Thankfully, no one in that family was hurt, but giving God credit for not taking down a few pieces of wood while ignoring the damage you also believe is part of God’s plan is a mark of religious delusion. It’s the same mindset that praises God after a plane crash because there’s a single survivor — you’re missing the point.

It makes me wonder what it would take for these people to stop giving God credit for this nothing-burger. If a family member perished in the disaster, would they still be praising God? If the closet fell but other parts of the house stayed up, would they be upset about it?

Smith should just admit he’s grasping for any good news he can find instead of pretending God is sending a sign to the people of Alabama. No one deserves praise for destroying all-but-one thing.

(Thanks to Johanna for the link) 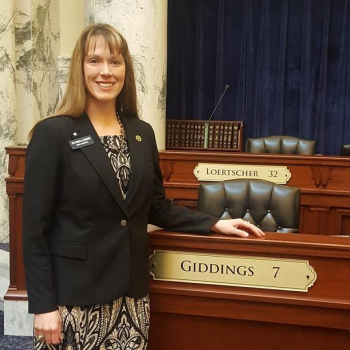