On Monday night, Ali Blair delivered the first atheist invocation the Berea City Council in Kentucky has ever seen. And it inspired a flurry of back and forth during the public comments portion of the meeting.

Here’s the invocation that Blair delivered.

I invite you to raise your head, keep your eyes open and look around at your neighbors gathered in this room during my comments. Please sit if you’d be more comfortable.

Since March 23rd is Atheist Day, this feels appropriate. I am an atheist. I am a Berean. I value egalitarianism and equal representation. I believe in the greater power of the collective. I am fully engaged in building community. AND I am an artist.

I am going read a few lines from an essay that moved me.

These are the words of Rev. Sekou, a child of the black Pentecostal church.

‘We plead with the artist to never side with the makers of history but rather the victims of it. And the victims will be legion — Muslim, Black, queer, young, undocumented, old, female, differently-abled, and all of the poor. Artists must be lobbyists for the languishing. Artists are not politicians. They are legislators of hope, parliamentarians of possibility. Artists are diplomats between the world that was, the world that is and the world that is to be. Artists are architects of being; building communities where there are no strangers only neighbors.’

We are all born artists. I urge you to show up to this work as an artist — tonight, tomorrow and for the remainder of your terms, actively engaging in building a community where there are no strangers only neighbors.

Over 15,000 people share the City of Berea. All of those people ARE Bereans. I invite you to reflect on the privilege and responsibility you each hold … when you make decisions you are making them for ALL of us, ALL of your neighbors; Muslim, Black, queer, young, undocumented, old, female, differently-abled, all of the poor, the secular humanists, the freethinkers, the non-religious, agnostics and atheists. Let’s take a moment to bring them all into this space.

I ask the council, mayor and all gathered to look within yourselves and invoke your own capacity for compassion, civility, and reason and let these things guide you as you make decisions tonight.

That’s a lovely speech. Nothing in there is offensive. And yet local news headlines said “invocation sparks controversy” and “sparks debate.”

What on earth did people complain about when they had the chance to speak at the mic? The good news is that there were plenty of atheists who wanted to get rid of the invocation practice completely.

One woman called the invocation “inspiring.” Another quoted scripture: “‘The fool hath said in his heart there is no God.'”

“I may be nobody to many of you,” one woman said, “but I care about Berea and I ask that you revisit this policy of including prayer in government functions.”

“I just think it’s wrong for people to think bad about God,” one nine-year-old girl said.

“It will be my honor and duty as a patriot and devout Satanist to invoke Luciferian influences over my hometown,” one man said.

“We need prayer at all times,” one woman said. “If we need it anytime, we need it today.”

Public comment lasted for about an hour before city council moved on to other business — with some urging from a couple of other speakers.

“This is not a tent meeting. This is not a public forum meeting for anyone’s religious beliefs,” one woman said. “I would like us please, finally, get to the business I came to hear tonight.”

I love the showing of support from local atheists and how the best Christian arguments brought to the table are “Atheists are dumb” and “I want Jesus.”

Blair told me earlier today that she was grateful she wasn’t alone in the experience:

I felt very supported and like we had non-religious community well represented. I had individuals who wrestled with outing themselves and speaking publicly who ultimately decided to because they felt supported enough to do so. There were comments from allies too.

Good on Blair for, if nothing else, making some of those council members feel really uncomfortable during her invocation even though she gave them nothing to be uncomfortable about. 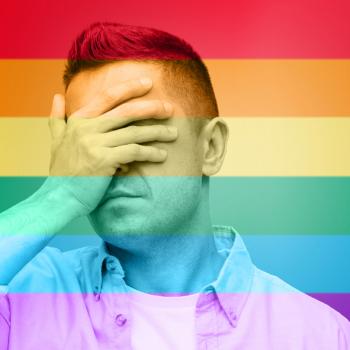