Pastor Robert Jeffress, one of Donald Trump‘s most vocal white evangelical supporters, has already denounced the Democrats as the “godless party.” (They’re hardly godless, but most of the presidential candidate readily acknowledge the vast diversity of beliefs among Americans and they don’t pretend only Christians are worthy of a seat at the table.)

Over the weekend, during an appearance on FOX News, Jeffress took issue with Rep. Alexandria Ocasio-Cortez‘s recent tweet decrying “thoughts & prayers” from politicians who have the power to prevent future mass shootings yet refuse to do anything sensible about it.

… You know, we talked last week about how the Democratic Party is becoming a godless party, and here’s one more piece of evidence of that: Their marquee star ridiculing the power of prayer.

And look, no Christian I know believes that you shouldn’t do anything except pray, but we do believe prayer is the most important thing we can do. It’s like somebody said, “There are many things you can do after you have prayed, but there’s nothing more important you can do until you have prayed.”

Ocasio-Cortez, who is religious, wasn’t denigrating prayer or religion. If Jeffress learned how to read, he would know that. She was criticizing people who use prayer as a cover so that they don’t have to do anything meaningful that might upset their gun-loving base.

In New Zealand, instead of wasting time with platitudes about prayer, the prime minister openly suggested the country would ban semiautomatic rifles. Even if that’s not possible, the debate is already going on regarding gun buybacks and possible restrictions on ammo for semiautomatic weapons.

In the U.S., Republican refuse to even have that conversation. They say that the immediate aftermath of a shooting isn’t the right time to talk about guns, or they offer prayers in lieu of any substantive discussions about the problems with easy access to military-grade weapons or right-wing domestic terrorism.

That’s what Ocasio-Cortez was talking about. And Jeffress accused her of being anti-prayer. He’s a Christian pastor who lies with reckless abandon because he knows his congregation will never call him out on it.

He also said that line about how Christians believe in prayer and action… which sounded all well and good until he added that idiotic bit about how prayer is the “most important thing we can do.”

No. No it’s not. It never is. In the battle of prayer vs. action, action wins every time. For Jeffress to say prayer is more useful proves exactly what Ocasio-Cortez and others are saying — that right-wingers make such a huge stink about praying that they fully ignore the action. Why do something meaningful when you have to make sure everyone is praying first?

Jeffress shows you just how empty Christian rhetoric is in the aftermath of a tragedy. 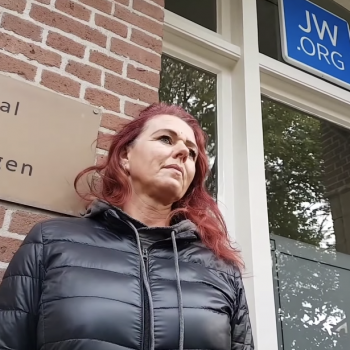 March 17, 2019
Victims of the Jehovah's Witnesses Speak Out in This Powerful Documentary
Next Post

March 18, 2019 Anti-Vax Student Sues Kentucky Government for Barring Him from School
Browse Our Archives
What Are Your Thoughts?leave a comment