I knew there would be people blaming Islam for the horrific mass shooting in Christchurch, New Zealand, but I’m still shocked it was a politician who did it.

Fraser Anning, a right-wing independent senator from Australia, was quick to blame “Muslim immigration” for a white man who committed an act of terrorism in a mosque.

Does anyone still dispute the link between Muslim immigration and violence?

He elaborated on his despicable ideas in a lengthier statement:

Anning, a far-right independent senator from Queensland, said Muslims “may have been the victims today; usually they are the perpetrators.”

“The truth is that Islam is not like any other faith,” Anning wrote. “It is the religious equivalent of fascism. And just because the followers of this savage belief were not the killers in this instance, does not make them blameless.”

He spent more time in that statement denouncing Islam than whatever right-wing ideology may have inspired the shooter.

This is the same guy who, last year, suggested a “final solution” — genocide, in Nazi-speak — to what he said was the problem of Muslim immigration in his country.

It’s a reminder that no matter how quickly anti-Muslim conservatives will say violence is never the answer, in cases like these, they do plenty to stoke fear in people who have the capability and desire to carry out the underlying suggestion. 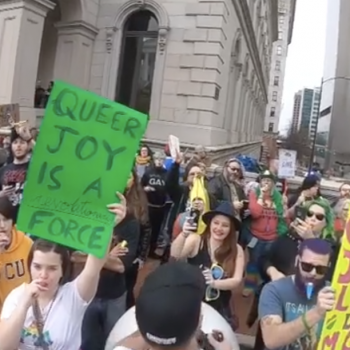 March 15, 2019
Westboro Baptist Church Protest Drowned Out By Metalheads with Kazoos
Next Post

March 15, 2019 Reading (PA) Mayor Calls Church Developer the "Devil" In Text to Local Publisher
Browse Our Archives
What Are Your Thoughts?leave a comment