Diocese of Brooklyn: SNL Must Apologize for the “Harassment” by Pete Davidson March 12, 2019 Hemant Mehta

Diocese of Brooklyn: SNL Must Apologize for the “Harassment” by Pete Davidson

Over the weekend, Saturday Night Live‘s Pete Davidson made a joke about how he was reluctant to let go of R. Kelly‘s music, despite criminal allegations against the singer, because he’s talented.

Suggesting his views were really no different than everyone else’s, he said, “If you support the Catholic Church, isn’t that, like, the same thing as being an R. Kelly fan? I don’t really see the difference. Only, like, one’s music is significantly better.”

Was the joke fair? The Catholic League (a.k.a. Bill Donohue in a perpetual state of anger) claimed Davidson “libeled all priests.”

He did not compare the alleged predator to an alleged predatory priest — he compared Kelly to the entire Catholic clergy. His bigoted remark deserves to be condemned by everyone.

His “bigoted remark”… or, as regular people refer to it, a “joke.”

And Davidson’s joke, if you want to dissect it, was that people don’t want to let go of art just because the artist is problematic. Comparing that mentality to what’s happening in the Catholic Church is absolutely fair. Maybe your priest isn’t a predator, but supporting the Catholic Church in general means you’re providing cover for the organization, and that deserves to be pointed out.

But it’s easy to dismiss The Catholic League because of its pathetic reputation and constant outrage.

It’s not as easy to ignore the Diocese of Brooklyn, which is now calling for “an immediate public apology” by Saturday Night Live and NBC.

Apparently, the only acceptable bias these days is against the Catholic Church. The faithful of our Church are disgusted by the harassment by those in news and entertainment, and this sketch offends millions. The mockery of this difficult time in the Church’s history serves no purpose.

The clergy sex abuse crisis is shameful, and no one should ever get a laugh at the expense of the victims who have suffered irreparably. The Diocese of Brooklyn strives every day to ensure that sexual abuse by clergy never happens again.

Good god, the people who shifted predator priests from one Church to the next think Pete Davidson is guilty of “harassment.”

No one’s laughing at the expense of victims. The joke targeted the predator priests and the institution that covers up their crimes.

And then, perhaps to make it abundantly clear how little self-awareness they have, check out what the Diocese said to close out the press release:

It is likely that no other institution has done more than the Catholic Church to combat and prevent sexual abuse. The insensitivity of the writers, producers, and the cast of SNL around this painful subject is alarming.

That’s like an arsonist saying he’s put out more fires than anyone else.

If the Catholic Church has “done more” to combat sexual abuse, it’s only because they allowed sexual abuse to thrive for decades and there was nowhere left to go but up.

These people are more outraged over a joke about the Catholic Church than they ever were about rapes committed by Catholic priests. Their fake outrage should be called out and mocked until everyone who still has the audacity to call themselves “Catholic” are too ashamed to use the word in public anymore.

March 12, 2019
Betsy DeVos: Churches Can Get Taxpayer Money to Provide Services to Schools
Next Post 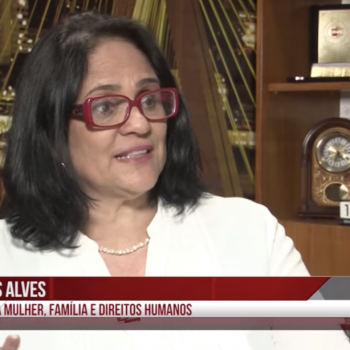