Donald Trump finally has a formal “science adviser,” and it’s a well-respected scientist! But it’s hard to get excited when he refuses to stand up to climate change misinformation from Trump and other Republicans.

Up to this point, Trump has avoided having a science adviser altogether. Maybe that’s irrelevant given how little he seems to listen to his other advisers. But it’s surprising that, when he finally appointed someone, it was a person who (gasp) actually had credibility in the science community.

Kelvin Droegemeier, a meteorologist, previously served as both the Secretary of Science and Technology for the state of Oklahoma as well as Vice President for Research at the state’s flagship university.

But in an interview with VICE News, Droegemeier insisted it wasn’t his place to correct the misinformation spread or accepted by the president.

Droegemeier, 60, became director of the White House Office of Science and Technology in January. And there was little on the record about his specific views on climate change. But given his stellar reputation, scientists might expect him to act as a corrective to a president who regularly uses winter storms to mock climate change and erroneously suggests that global warming isn’t real.

So when the news came in late February that the White House was putting together a panel to see if climate change is really a threat, even though the Defense Department has already said it is, and that this panel would be run by renowned physicist William Happer — who thinks carbon dioxide is “a benefit to the world” — it felt like an opportunity to delve a little deeper.

But in an interview in his brand-new office next to the White House, Droegemeier evaded questions about his own views. He told VICE News he has no opinion on the president’s winter-storm tweets and has no plans to talk to him about them.

“The main thing for me is to provide the president with the best science advice possible,” he said.

What good is it to provide the president with “the best science advice possible” if he doesn’t amplify that information? How is the advice helpful if the president continues to spread lies? What’s the point of having a much-needed understanding of the magnitude of the climate crisis if you’re just yelling into the void?

Droegemeier doesn’t seem to think those questions matter. Which means he’ll be nothing more than cover for a president who continues spreading scientific misinformation.

As for the man running the panel, Droegemeier attempted to explain Happer’s comments on carbon dioxide by referencing plants. “Well, obviously plants, you know, in their respiratory processes, take up carbon,” he said. When we noted that’s not what scientists typically mean when they talk about carbon emissions, he agreed but said we’d have to talk to Happer about that.

Asked if he, like Happer, thinks carbon emissions are good for the planet, he said, “I don’t really have any view on Will’s opinions. My goal is to gather all the best science evidence I can, and present it to the president.”

Implicit in the role of presidential science adviser is not just gathering the best information and presenting it, but making sure that information enters the public domain.

Droegemeier is like a filmmaker who wants to make a great movie… without caring if anyone ever sees it. What’s the point?!

If the president isn’t going to take your advice seriously, you’re not really an adviser. You’re a political prop. 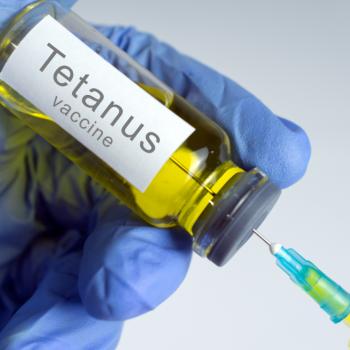 March 10, 2019
An Unvaccinated Boy Who Nearly Died of Tetanus Racked Up a Million-Dollar Bill
Next Post