A Courageous Pakistani Man Who Exposed “Honor Killings” Has Been Assassinated

Nearly a decade ago, a video went viral in Pakistan. It featured five women clapping and singing at a co-ed party. A man is seeing dancing with them. They were all having fun. And they were all guilty, somehow, of dishonoring their families in the process.

That video marked the last time any of them were seen alive.

After a local Muslim leader ordered the girls to be killed, their families confined them, then “threw boiling water and hot coals on them, then killed them and buried them somewhere in the Kohistan hills.” They were all apparent victims of “honor killings.”

Even weirder was how their families, to throw off law enforcement, found a different set of girls to stand in for the murdered girls. That way they could tell police, “Look, the girls are still alive!” (Seriously, it’s that messed up.) One of the stand-ins had her thumbprints disfigured so she couldn’t be identified as a fraud.

We know all of this in large part due to Afzal Kohistani, a whistleblower who tried to draw attention to this case through the media and his own lawsuits.

“This has destroyed my family. The girls are dead, my brothers have been killed and nothing has been done to bring justice or protect us,” said Kohistani, 26, who has received death threats. “I know I will probably be killed, too, but it doesn’t matter,” he said in an interview last week [in December of 2016]. “What happened is wrong, and it has to change.”

“No one in my district or my province has ever spoken against honor killing. They tell me I have defamed my culture, my religion, my tribe,” Kohistani said this month. “Everybody knows what happened, but no one is ready to come forward. This is an illegal, unconstitutional and un-Islamic tradition, but people don’t even consider it a crime.”

The reason this is back in the news is because Kohistani was murdered this week.

Pamela Constable, who wrote the initial story about the girls for the Washington Post, shared her reflections about the man who gave his life to expose the effects of radical Islam mixed with cultural barbarity in a small Pakistani village.

I had thought a lot about the word “honor,” how it could become conflated and confused with male pride, with control over the lives and choices of women, with tribal traditions trying to survive in a rapidly modernizing world.

I had met many people in Pakistan who were working to change these customs, but most were female professionals or activists. Afzal Kohistani was a young man with no expertise or influence, but he had a clear, unshakable notion of what honor should mean.

He saw the writing on the wall, yet he continued working to expose the brutality he saw right in front of him. That’s what courage looks like. For it, he paid the ultimate price.

(Featured image via VICE News. Thanks to Brian for the link) 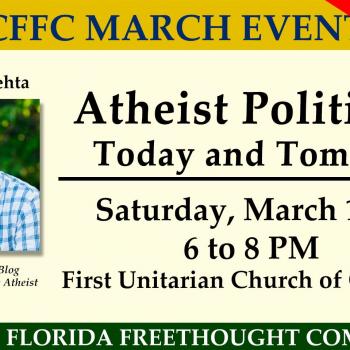 March 9, 2019
I'll Be Speaking in Florida Next Week
Next Post

March 9, 2019 Podcast Ep. 260: Taxpayers Aren't Funding Churches... Yet
Browse Our Archives
What Are Your Thoughts?leave a comment