Yesterday, Ruth Walker of the Eastern Iowa Atheists delivered an invocation in the Iowa State House, reminding legislators of the immortal words of physicist Richard Feynman: “The first principle is that you must not fool yourself — and you are the easiest person to fool.” 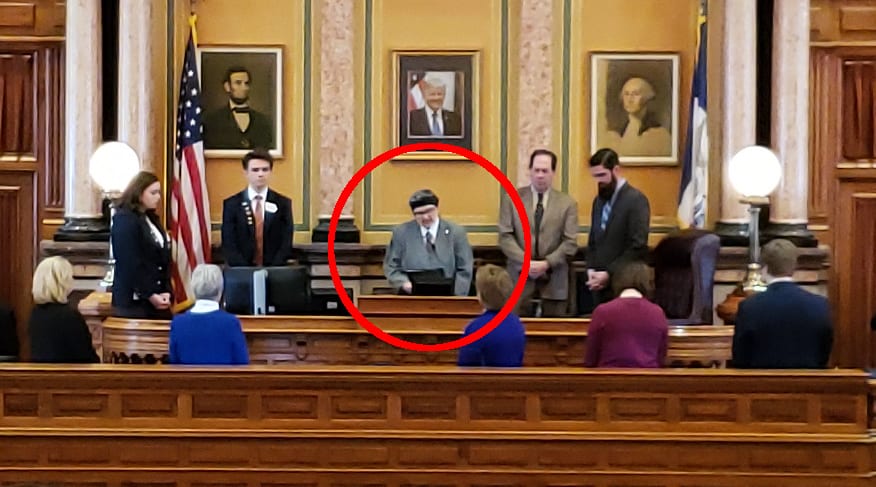 Thank you, Mister Speaker. And thank you to Representative [Bob] Kressig.

Inclusion. We’re all in this together.

In 1892, a Baptist minister who was a Christian socialist penned the original version of the pledge, stressing “one Nation indivisible.”

The brilliant freethinker W. E. B. DuBois noted in 1960, “The essence of the democratic process is free discussion. There was a time when men were not allowed to talk about universal suffrage or the education of women, or freedom for Negro slaves. Today communism is the dirty word and socialism is suspect.”

Ideas that stand the tests of time are evidence-based, informed from the methods of science, always ready to change with further evidence. Practicing this helps to recognize good ideas from unexpected sources.

Lastly, words from Nobel Prize-winning physicist Richard Feynman: “The first principle is that you must not fool yourself — and you are the easiest person to fool.”

Activist Justin Scott, who took the picture above, tells me there are other Humanist invocations scheduled later this month in both the State House and Senate on March 18 as part of the Humanists of Linn County‘s “Reason on the Hill” lobby day.

You can see previous atheist invocations in the Iowa House here and here.

March 8, 2019
Judge Who Told Jury God Told Him Defendant Was Innocent Gets Only Mild Warning
Next Post

March 8, 2019 Jim Bakker: God Spoke to Me in 2007 and Said Donald Trump Would Be President
Browse Our Archives
What Are Your Thoughts?leave a comment